The human body functions on many different frequencies. EEG measurements of brain waves are generally in the range of 0-40 Hz (cycles per second).  The heart beats between 60 and 100 times per seconds or 1-2 Hz. The cranial-sacral rhythm is 8 to 14 per minute, or .13-.23 Hz. The electromagnetic frequency of the planet – known as the Schumann Resonance – is 7.83 Hz. Each organ may have its own frequency, and it is probable that there are different frequencies associated with different layers of the subtle energy body.

The effects of man-made frequencies associated with electro-magnetic technology, including wi-fi are the subject of ongoing research. Widely divergent opinions on the subject seem to hinge upon whether one believes in industry funded research or is willing to consider other sources.  My own understanding based upon a survey of the literature, and research conducted in the laboratory of life in a wide variety of environmental settings, is that the human mind-body continuum exists in a very delicate balances with natural energies which for millenia have remained largely the same. Only in the last generation or two have humans, and nature in general, been forced to adjust to the proliferating array of radio frequency radiation.

Some would fault this assertion as “unscientific” and demand rigorous science. While this is a sound objection, it must be understood that in today’s world, science is only as unbiased as the money funding it, and with most university research budgets tied to corporate grants or biased interests, where can truth be validated? The BioInitiative Report, written by 10 M.D.’s and 21 Ph.D.’s in 10 countries is widely cited by those concerned about the perceived dangers of low intensity electromagnetic radiation – and it is criticized by mainstream (corporate funded) scientists as being authored by self-described scientists on the fringe. They assert these studies have not been properly replicated. Again, it must be 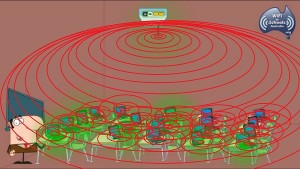 emphasized that good science requires commitment and independent funding and in the U.S. there is none. Since the Telecommunications Act of 1996, there has been no government sponsored funding for research into the potential negative effects of radio frequency radiation (RFR). The FCC (currently headed by a former telecommunications executive) considers it a dead issue. When Dr. Henry Lai, Emeritus Faculty at the University of Washington, began his research and started to generate data which demonstrated biological effects from RFR, Motorola tried to get the President of the University of Washington to fire him. This is the unspoken shadow of corporate money which hangs over the reputation of every scientist alive today – swallow the corporate agenda, or be prepared to teach part time at a community college.

Given the uncertainty over the long-term effects of wi-fi, especially on children (this has never been studied), wouldn’t a wiser approach be for the FCC and government regulatory agencies to adopt a precautionary approach and require wired networks (instead of wireless) in schools, libraries and public places, until long-term epidemiological research has determined the safety of wi-fi? Meanwhile, we are just allowing a corporate controlled government cave to industry demands so that the most profitable industry on the planet can continue to generate profits without due regard for the health and welfare of future generations. Sound familiar to anyone following the global debate over climate change?

The following eighteen minute video clearly summarizes the key issues regarding wi-fi in schools. Wi-fi uses the same frequency range as cell phones. Wi-fi routers have a range of about 30 meters and are generally always turned on. If 20 students using laptops are downloading a 4 minute video simultaneously, it will take on average 4 minutes, with the router operating at full power. As curriculums become more and more based on computer distribution, an entire school of children downloading their lesson assignments at the beginning of the day begins to look like a gigantic microwave oven – except we must be clear here, we aren’t talking about heating of tissue, but biological disruption of the human organism – breakage of DNA strands, and  calcium voltage gated channels stuck in the “on” position.

Again, there has been no scientific research conducted into the effects of in-school wi-fi systems. Our children are guinea pigs in a gigantic, unmonitored experiment. Responding to a complaint by concerned individuals, the Washington State Dept. of Health (DOH), and the Superintendent of Public Instruction (SPI), issued a report in early 2014 concluding that there was no evidence to support any concerns around the dangers of wi-fi, therefore, no precautionary action would be taken. This report has generated several critiques for its flawed analysis here and here.

Children are not “little adults”. Their thinner skulls and softer bones are more penetrable by RFR. Furthermore, today’s generation of children are the first who have been exposed from an early age, sometimes beginning at the hospital and at home with wireless baby monitors. They will experience a much longer exposure over their lifetimes. In contrast, I purchased my first cell phone at age 43 and wi-fi only begin to be omnipresent around the turn of the century.

Government agencies increasingly are under the influence of the industries they are tasked with monitoring – a phenomenon known as “regulatory capture”.  New technologies are proliferating faster than they can be tested. Teachers are not taught to recognize the potential symptoms of microwave radiation sickness. The official health designation for people made ill by microwave radiation is Electro-hypersensitivity syndrome (EHS), but as one local naturopath astutely pointed out – this term stigmatizes and marginalizes those made ill instead of placing the focus on the potential causative agent.

In 2001, the World Health Organization classified EMR as a class 2B potential carcinogen in the same category as DDT, dry cleaning chemicals, lead, and engine exhaust. At a Seattle City Council smart meter hearing a medical doctor who has made a tidy living for himself testifying on behalf of corporate clients cynically commented on the WHO classification by pointing out that class 2B also included toothpaste whitener, aloe extract, coffee and shift work.  I would wager that the good doctor knows very little about the meaning of shift work – being paid sub-par wages at a stressful job which chronically disrupts one’s normal wake-sleep cycles over an extended period of time. I see this condition quite often in my community acupuncture clinic.

Over the last 15 years, childhood chronic diseases have seen an alarming rise in incidence: allergies, autism, learning disorders, behavior disorders, ADHD, strokes, brain tumors – are all steadily increasing for children 18 years and under. Although I would not suggest a linear cause-effect relationship as the world is far too complex, a strong correlation does exist with the increase in wireless technologies – mobile phones, 3G, 4G, cordless phones, wi-fi internet, baby monitors, digital radio and TV, “smart” electrical meters, “smart” appliances.

In conclusion, there is no shortage of evidence warranting a precautionary approach banning wi-fi from schools and libraries. People advocating for this are not generally anti-technology. Safe alternatives can be implemented using wired networks. But it will only happen in the near future if people of conscience take the time to educate themselves and then speak out. Otherwise, the dollar will continue to rule. Our children represent our highest hopes and dreams for the future of our world. Let us choose wisely.

Means for Change – Effects of the Wireless Age

Martin Pall, Ph.D. Professor Emeritus, Washington State University presents to the Portland Public Schools Board of Education, Sept. 16, 2013 explaining his findings that calcium channel dis-regulation in the cell membranes causing an excess of calcium accumulation is the mechanism for wi-fi induced disease.

Take Back Your Power – award-winning movie and movement to stop the roll out of wireless utility meters for reasons of economic cost, fire safety, grid-network vulnerability, health, privacy, failure to demonstrate benefits in carbon savings, and corruption of constitutional democracy.

Beyond the Smart Grid -and other blogs on the CommuniChi website.

1 thought on “Wi-Fi in Schools and Homes; Is it Safe?”