Any wilderness journey is a story of contrasts – low and high, water, rock and snow, challenges and rewards. With a sense of deep reverence for the great circle of life, the elemental forces flowing into each other, we began our journey with a trip to the seashore. An eagle drifted over head as we departed the beach for the Sol Duc trail-head, the first of many auspicious signs. 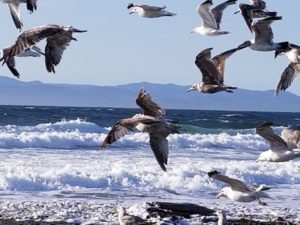 Thank you little frog for being here. I 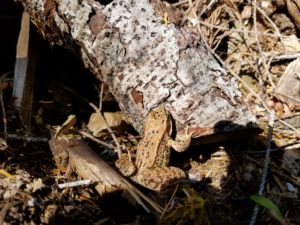 know not what your day looks like, where you get your food, where your family is, what your home looks like – a spot of mud with decayed leaves for a pillow? But I trust you have a purpose in this world, and therefore, your presence and survival is linked with ours. May this forest always be here for you. In some distant future life, may we meet again and offer each other mutual aid and kindness.

Olympic National Park officials plan to begin relocating half of the estimated 725 mountain goats found in the park to the North Cascades, shooting the rest with high power rifles. Their logic is that the goats aren’t native to the park, and that they harm the plant life and disturb the overall ecological balance. I find that anthropocentric logic extremely stretched. For sure, the goats can be a nuisance. They tend to hang around your camp and wait for you to pee, so that they can lick up the salts. One hiker was fatally gored in 2010 – his wife unsuccessfully sued the government for negligence in removing a “hazardous” animal.  Throwing rocks usually keeps the goats at bay, but in the end these are wild animals requiring caution. To quote Henry David Thoreau – “we need the tonic of wildness”. Under the guise of wilderness management, we risk turning our sacred public places into neutered theme parks, devoid of any risk – casual amusement facilities that require nothing more of us than passive, distracted engagement typical of the screen age consciousness.  Moving through wilderness requires both deep respect for other life, and total sensory awareness.

Cougars and bears live in the park also. Do we deny them a right to exist because they might pose a threat? (Bear canisters are required for all food and scented items in the park, in order to prevent bears from associating hikers as a food source.)  And what of the overwhelming impacts of humans on the planet in general, and parks in particular?  Navy Growler planes increasingly encroach upon the sacred silence of our national parks. Twice I heard them shattering the silence of the night from our camp in Cat Basin, more than 10 miles inside the park boundary, and close to one of the quietest spots in the world. War machines that rain death and destruction upon villages in far away places are okay, because… well….jobs. But goats, now there a nasty problem that need to be dealt with.

Hunters introduced the goats in the 1920s, but the Olympic Mountains contain few salts necessary for their diet. Okay then, instead of spending $350,000 a year to relocate and kill them, why not hang inexpensive salt lick in strategic areas away from popular hiking routes.  That might draw objections from some wilderness purists who would assert that it isn’t natural. But neither is the wholesale slaughter and highly impactful relocation of a species of animals that have survived and thrived for a century. 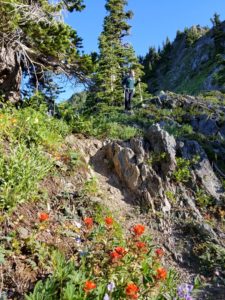 After leaving Boston Charlie’s we entered the Bailey Range proper. The trail was often little more than a steep goat track requiring handholds on roots, rock, and branches on steep sections. The solitary beauty was exceptional. 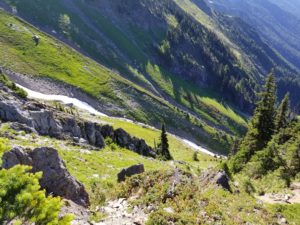 The mountains teach you many things if one is open to learning – humility being first and foremost. After crossing the first snow gully, visible in the foreground, we reached a deeper gully which was only accessible by traversing a steep (55 degree) scree slope with no footholds.  A fall here could have fatal consequences. It was obvious that goats had passed through, but no humans in recent times. I swung at it with the adze of my ice axe, thinking to chop steps, but my light weight axe did little to accomplish my goal. As the leader of the trip, I had to also think about the safety of my partner. We had planned a 6 day traverse, finishing by walking out the North Fork of the Quinault River. But there was no sense in risking our lives.

I had planned to refill our water at Eleven Bull Basin after crossing the gully complex – we had about two sips each left at this point. We turned back though, happy to still be alive amidst stunning vistas in all directions, but acutely aware of the preciousness of water. We ended up boiling water at the pond at Boston Charlie’s, no longer concerned about our carefully measured 6 day fuel supply. 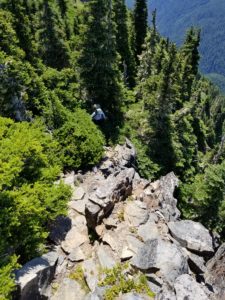 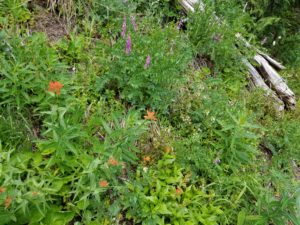 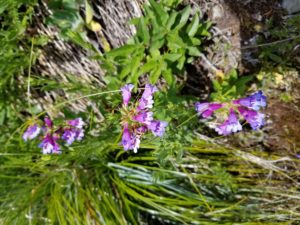 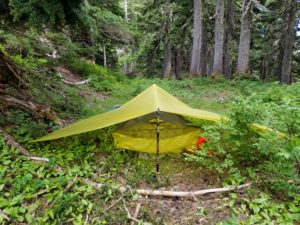 Camp 2. After 18 hours of hiking our first two days, we found a quiet spot off trail to pitch our tents at 4pm and immediately cooked dinner. At 5pm we went to our tents and slept until 6am the following morning. Near complete silence all night, except for the unfortunate intrusion of a couple of Growler flights, one private aircraft, and one commercial jet. (I thought it was against FAA regulations to fly over the park?). After the last jet had passed, I slept and dreamed deeply, reconnecting with my mom in the spirit world, and receiving a message of affection from my daughter, about to depart on her own adventure. We need these places of silence as an antidote to the stresses of modern life, to reconnect with spirit, our ancestral roots, and to heal from all disharmony. 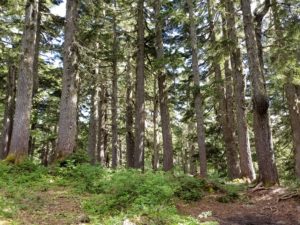 Our campsite in Cat Basin was in a beautiful forest glade. The massive conifers felt like a congregation of Ents in Tokien’s Middle Earth, their roots sending silent messages to each other. 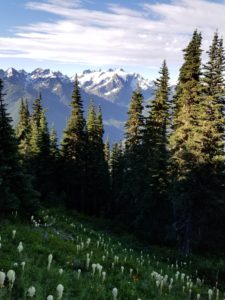 Day 3. In the morning, we backtracked about 30 minutes to the water source in the gully coming off of Cat Peak and refilled all our water bottles, rewarded with yet more spectacular views of Mount Olympus and the snow covered peaks of the Southern Bailey Range.

Ferry ride back to Seattle. One journey ends, another begins. Arthritis in my knee had given me problems in the lead up to the trip over the winter and spring. Three days of hiking, approximately 35 miles, and perhaps 6000 feet of elevation gain and loss, and my knee didn’t whimper a bit. These natural spaces contain powerful reservoirs of natural energy, or chi if you will, healing all who pass through them, at all levels – body, mind, and spirit. A few hours at my desk, opening accumulated mail, my arthritis kicked up again. On the advice of a hiking friend, and my own intuition, I built myself a standing desk. And I’ll be returning to the mountains again I hope for more nature therapy.

“I went to the woods because I wished to live deliberately, to front only the essential facts of life, and see if I could not learn what it had to teach, and not, when I came to die, discover that I had not lived.” Henry David Thoreau