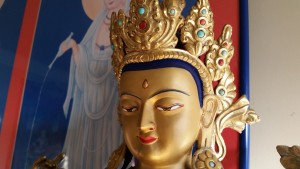 Social media can be used productively as a means of connecting with friends, staying informed on current news in the world, and participating in movements for a broad array of peace and social justice issues. However, surfing the internet can also devolve into a mindless time filler, performed with no particular motivation.   From a Buddhist perspective, when you aren’t aware of your conscious mental intention you are on a slippery slope leading away from awakening, further down the path of suffering. And so it was last week, while in the middle of an extended web surf, a post from my Dharma teacher popped up in my Facebook feed reminding me that the more one surfs the net, over time this plants the seeds for a distracted mentality – unable to focus and forgetful of deep truths in life regarding the path to peace. Immediately sensing the truth in my teacher’s words, I decided to go “cold turkey” from Facebook for a week to gain a deeper understanding of my internet addiction, freeing up time for listening, reflecting, and meditating on the Dharma.

The year was 1998. I remember hooking up my first laptop to a dial up connection and being amazed and inspired by the power of the internet. The world literally felt like it was at my fingertips. Seemingly unlimited information and knowledge were mere seconds away. Perhaps it would have been useful if there had been a warning sticker on the box that said – “too much information can be hazardous to your health”. Paleontologists generally agree that human social organization and brain structures have evolved gradually, over at least the past several hundred thousand years.  Nonetheless, I have noticed a profound change in human social psychology following widespread public use of the internet and an array of connected devices, all in just the last twenty years, not even a blink of the eye on the timeline of human evolution.

Suddenly, we have all been inundated with so much technology and “smart” information systems that everyone seems glued to their screens, constantly holding or reaching for their “smart” phone, striving to be more efficient even as the technology consumes more of our time, increasing our anxiety and distractedness. Then we look for another app to achieve greater efficiency, which takes more of our time, causing more anxiety and distraction, and so on.

If you repeat an action frequently enough, it becomes a habit, an unconscious reflex. In the first three days of my Facebook fast, dozens of times I unthinkingly clicked in my web browser’s toolbar menu to open up Facebook – something I have done tens of thousands of times in the past 8 years since joining. Oops! How did I get here? These patterns become hardwired over time.

All of this unconscious programming is beginning at a very tender age now with the current generation who often gain access to screens and keyboards at frighteningly young ages. Sometimes I think we need an app reminding us to just unplug and rest our minds in the innate clarity of consciousness, reaffirming our positive motivation to live a meaningful and aware existence that causes as little harm as possible. And while we are on the topic of programming, are you aware of Google’s “creepy line”? Google’s CEO, Eric Schimidt in 2010: “Google policy is to get right up to the creepy line but not cross it. I would argue that implanting things in your brain is beyond the creepy line. At least for the moment, until the technology gets better.” Is he serious or just jesting?

I’m not waiting to find out. Life is short, and unless you are a monk living in a cave, you’re probably going to need to learn to navigate the promise and pitfalls of the internet as you take care of the business of your life in a world which increasingly depends upon electronic transactions and rapid communication. We need to find a balance though, unless we are content to let Google, Facebook, Amazon, etc. take over our minds. If we wish for true inner freedom, that takes serious work and mental discipline. Mick Jagger famously sang: “I can’t get no satisfaction, but I tried, I tried, I tried.” My experience tells me that we are usually looking in all the wrong places and not cultivating the seeds of wisdom and compassion which are already within our hearts. It’s never too late to begin.