In the 1972 film, Brother Sun, Sister Moon, Franco Zeffirelli‘s adaptation of the life of Saint Francis of Assisi, one particular scene beautifully portrays the wide range of emotions – from fear and shame to courage and joy, surrounding our innate instinct to act with a deep sense of compassion: Francesco has been dragged by his father before the local bishop to arbitrate in a family dispute after he tossed expensive clothing from his father’s shop out the window in an act of worldly renunciation. His father, blinded by greed for gold and material gain is weeping, not only at his worldly losses, but for the loss of his son who he can neither understand nor accept.

As the townspeople gather round, witnessing the spectacle, Francesco removes all his clothes and returns them to his father, with only love in his eyes, along with his ancestral name, choosing to be born again in the eyes of God, walking forth naked from the town to follow a simple life of charity and poverty according to the Gospels.  The gazes of wonderment from some of the onlookers, and the subsequent growth of his newly established order remind and inspire us to believe that such events are not limited only to the lives of recognized saints, but that everyone has the potential to transcend self-limiting notions and strict adherence to mundane rules, beliefs, and social hierarchies.

Spiritual freedom, and even worldly happiness are subjective experiences which are difficult to quantify, and impossible to transfer to another. As the saying goes, “you can lead a horse to water, but you can’t make him drink.” Nonetheless, modern scientific research continues to make huge strides in understanding the neurological and emotional benefits of mental states like mindfulness and compassion. And though mindfulness, over the past several decades, has firmly established itself into the modern consciousness, compassion is still excluded, to a degree, from our collective social consciousness, as if tainted by its religious association.

Fortunately, this is all changing, and Seattle is on the front lines of this transformation. Seattle became the first city to affirm the Charter for Compassion in 2010, and is a participant in the Compassion Games (which as you can probably guess from the title is indirectly a response to the dystopian mindset perpetuated in popular media by films such as the Hunger Games).

All of this is having profound implications for parenting, education, business, health care, environmental advocacy, and the broader social and ecological imperatives of solving the root causes of suffering on the planet. Want to learn more? 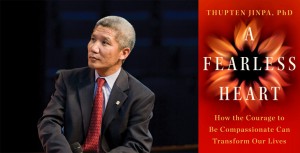 At 7:00 p.m. on Wednesday, May 13, Geshe Thupten Jinpa, Ph.D. will be speaking at Kane Hall at the University of Washington in Seattle.  Tickets are limited and the event is expected to be full any day now.  Click here for ticket information.   Visit this page for more information on Geshe Jinpa and his speaking tour.

Geshe Jinpa was born in Tibet in 1958. His family fled the Chinese invasion in 1959 to India. He completed the Tibetan monastic training at Ganden Shartse University in South India. He then went on to complete his Ph.D. in Religious Studies from Cambridge University. He is the founder, President, and editor-in-chief of the Tibetan Institute of Classics, an Advisory Board member of the Mind-Life Institute, and Visiting Research Scholar at the Stanford Institute for Neuro-Innovation and Translational Neurosciences at Stanford University. He has translated and edited more than ten books by His Holiness the Dalai Lama and authored several books on his own. His most recent book, A Fearless Heart: How the Courage to be Compassionate Can Transform Our Lives will be available May 5th.