In Chinese medicine, and traditional cultures, autumn is a time of harvest. We gather ripe abundant crops and partake of colorful nourishing feasts. In doing so, we strengthen our bodies in preparation for the journey into winter and the unknown darkness. Spiritually, we are transitioning from the vibrant joy of summer to the still quiet wisdom of winter. As with any season, autumn is merely a way station on a never ending circle of wholeness. But this circle is in danger of being broken by the forces of greed which see no use for Mother Nature’s mystical perfection. Technology, they say, can do it better and there are big profits to be made, perhaps even global control of the seed supply.

As I watch a bright harvest moon rising in the East, I give thanks and reverence to the people, and the crops that have nourished my family, and all life, the  harvests – physical and spiritual – I have enjoyed. Now is the time to  rally our energies to act as truth warriors against faceless multi-national corporations aiming to replace nature’s bounty with GMO-induced death and disease. GMO stands for genetically modified organism. Initiative-522 – the statewide initiative would require the labeling of food in grocery stores containing GMOs.

In a few short days, ballots will be mailed out here in Washington state and voters will have an opportunity to enact a law establishing our right to make informed decisions about our health. Doing so will set the tone for GMO initiatives sure to follow in other states around the U.S. and ultimately – we hope – bring change at the federal level and in the fields.

The YES-522 campaign believes that food consumers (that’s all of us) have a right to know whether GMOs are in our food or not. GMOs are now labeled by law in 64 countries across Asia and Europe, and also in Alaska, Connecticut, and Maine, but nowhere else in the US. Why? Because corporations led by Monsanto have infiltrated the highest levels of government at the EPA and FDA, creating a revolving door between industry and the regulatory agencies which are supposed to protect us. Corruption in a word.

Since the mid-1990s, the number of Americans suffering from at least three chronic illnesses has doubled. Infant mortality rates have also increased.

The human immune system has developed over millions of years – predating the emergence of homo-sapiens. When GMO crops were introduced and began appearing on supermarket shelves in the mid 1990s, suddenly irritable bowel disease, ulcerative colitis, constipation, GERD, and a host of other gastro-intestinal inflammatory disorders began to spike upwards.

Twenty-five to thirty years ago, allergies were extremely uncommon. Now, they are an epidemic with people claiming allergies to seemingly benign plants like parsley. One possibility is genetic “drift” of GMOs – laboratory creations never before seen in nature. GMOs may be entering the wild and causing mutations, escaping from fields cultivated with GMO crops, causing our immune systems to go ballistic as unrecognizable ingredients enter our bodies. Entirely new and mysterious organisms found in our gut have been isolated and observed in the laboratory. Our delicate immune system is at war.  If GMOs continue to spread, it will be impossible to meaningfully label anything as “organically grown.”

The FDA in 1992 said that studies have proven that the safety of GMOs isn’t an issue. And even today, politicians parrot these lies, ignoring the conclusions of the FDA’s own scientists. Michael Taylor, then Deputy Director of the FDA was a former lawyer involved with Monsanto, the same company which once told us PCBs, DDT, and Agent Orange were safe. The FDA gives us “tobacco science” in an illusion of rigorous testing – studies with small sample sizes and short term measuring – meaningless in the realm of health. Cancer can take decades to develop. The new field of cytogenetics has only begun to reveal the extent to which genetic damage due to environmental toxins can show up in future generations of a species. Meanwhile, we are playing genetic roulette with life on Earth by allowing Monsanto and their ilk to profit throug 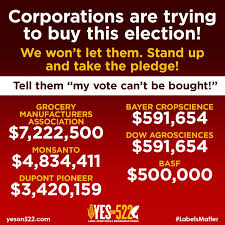 h the introduction of Frankenfoods created in laboratories, with grandiose promises of increased crop yields at lower cost (both untrue). If GMOs are safe, then let’s label them and let the consumer decide!

One physician, when confronted with chronic gastro-intestinal disease in her patients, developed a strategy of having her patient’s adopt a GMO free diet and in her experience, almost all patients recover, although the recovery can take up to a few years.

How do we avoid GMOs? The first step is to have them labeled. Vote YES on I-522 and encourage your friends and everyone you meet to vote yes as well. This couldn’t be more important. With six giant multinational corporations outspending citizen’s groups by a margin of five to one, our collective health depends upon a lightning fast and massive campaign of educating an uninformed electorate who are vulnerable to the deceptive ad campaign being run by the opponents of I-522 – Monsanto and five other huge multinational corporations, have illegally laundered their money through the Grocery Manufacturer’s Association of America (GMA). The Washington Attorney General today filed suit against the GMA.

GMOs are only found in 9 crops in the US as of 2012: soy, corn, cottonseed (oil), canola (oil), sugar beets, papaya, zucchini, crookneck squash and alfalfa (for hay). If you buy one of these items and it’s not labeled, chances are, it is a GMO. However, GMOs are also found in derivative products (i.e. ingredients) comprising over seventy percent of all foods in most grocery stores. If you want to avoid GMO – 1) eat only organic, 2) buy Non-GMO verified, 3) buy products from the Non-GMO shopping guide, or 4) Avoid at-risk products altogether. You can also download a free iphone app “shop GMO”. 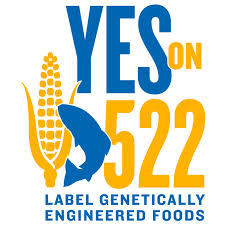 Some say that time is running out for life on the planet. I believe truth, and life itself, are remarkably resilient. But we need to act with wisdom and compassion and not be lulled asleep while our children’s future is on the line. Please Vote Yes on I-522 and share this with your friends and social networks.

May all beings be healthy and happy,