Your Own Private Cell. It had been two or three weeks since my last escape from the city. We scurry along like rats in a maze, running on our never ending treadmills, tapping at some existential lever, hopeful for our reward of sugar water – or so it sometimes seems.

Where is the true meaning in life? Nature is certainly a wonderful listening laboratory to better fathom the answer to that all important question, but it was not my only reason for escaping Seattle. With my daughter on a birthday sleep over, a little quality time with my wife was overdue. I was also planning to pay short visit to a Buddhist prisoner at Monroe State Penitentiary.

Jim has been in prison for 31 years for a sex offender charge. Despite a clean record for good behavior over the past 30 years, the parole board has not looked kindly on his situation. I had never met him before, but we had written back and forth nearly a dozen times in the past year. My spiritual teacher had encouraged me to write to him.

After verifying my name against a pre-approved visitor checklist, I was granted permission to meet the “offender” corresponding to the six digit number that I had fortunately remembered to jot down on a sticky note from his last correspondence. Leaving aside issues of worldly crime and punishment, from a Buddhist (spiritual) perspective, every life is precious and deserves not only a sense of sacred respect, but our love and compassion.

If the criminal justice system is truly concerned about the often stated ideal of rehabilitation, facilitating people’s journey of learning from their mistakes and become positive contributing members of society, you’d think they’d start with a sincere attempt to treat them like human beings – by using names instead of numbers and by focusing on the potential in each person rather than fixating on their mistakes. Isn’t that how we teach our children?

I navigated a series of prison security checkpoints, passing through a metal detector which momentarily zapped my energy, then two sets of two locked doors which separated different sections of the prison, finally ushered into a large cafeteria style room with perhaps forty small tables situated throughout. I was told to wait at table twenty eight, which I did.

When Jim finally appeared, we shook hands and smiled, gazing into each others eyes.  After apologizing for coming a day earlier than expected, I asked him how his meditation practice was and he said “Okay, I guess”. I asked what was difficult. He said “loneliness and separation from family”.  At one point, I told him that from a spiritual perspective, it is really no different outside prison.

Our minds, based on ignorance, anger, attachment, and other afflictions, propel us into actions which bring suffering to ourselves and others. Dharma practice is the path of pulling out the roots of ignorance, slowly breaking the wheel of suffering. The ultimate prison cell is the mind under the influence of delusions. True freedom is not a matter of which side of a concrete, steel and barbed wire fence one lives on, but planting the seeds of inner peace and cultivating them until they fully ripen.

After about an hour, it was time for me to go and I told Jim that I wasn’t sure when our paths would cross again, but to keep forging on towards true freedom.

Hope Lake. After a brief stop on the side of US Highway 2 to pay homage to the water gods at a legendary whitewater rapid – “Boulder Drop” on the Skykomish River, we arrived at the trailhead of Hope Lake around 830pm and began setting up the car for sleeping. We had originally intended to hike Deception Creek (lower elevation and better prognosis for (less) snow on the trail), but the trailhead parking lot was under a power line making it unfavorable for car camping.  As I searched Google Maps for a quiet spot on a Forest Service road to park the car, I suddenly remembered Hope Lake. Bingo! Early season – nobody was there and nobody came all night. In fact, last night was one of the most tranquil and serene nights of sleep I’ve had in years. The cool mountain spring air kept mosquitoes to a minimum.

We woke with the birds and the sound of the nearby creek, fired up the stove in the parking lot, ate a pot of hot oats with nuts and fruit, and were tramping up the trail at 6:00 a.m. As we exited from an old clear cut into the majestic understory of old growth, both my wife and I felt a palpable energetic shift in the air – as if something more vital and alive was vibrating within every cell in our bodies.

In places, one could sense the memory of freshly departed snow, the avalanche lilies fringing the trail just starting to pop open, an explosion of herbs and flowers just beginning. As we rose higher – the patches of snow began to come more frequently, presenting ever more challenging and potentially treacherous puzzles to navigate. 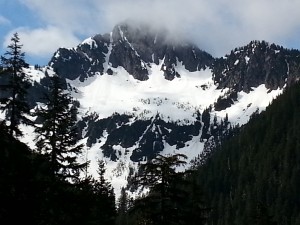 There’s a reason this trail isn’t recommended before mid-July. If you are looking for easy, hazard free hiking, check back in another month. But there’s also a reason not to wait – IF you know how to read snow, for example, knowing when a particular snow path is hiding a thin snow bridge likely to break through – if you place your foot there, potentially injuring an ankle or a knee, or how to navigate steep snow traverses with potentially deadly run outs in the event of a fall. 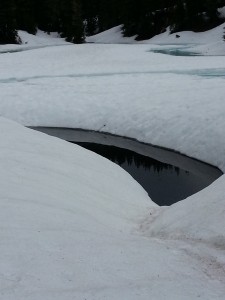 Around 8:00 a.m., we arrived at Hope Lake, buried in snow, and, giving the melting blue lake shore a wide margin, we walked around to the south where some bare ground offered itself to us for a morning of quiet contemplation, high in the Cathedral of Wilderness, the Cathedral of Inner Stillness.

What is the purpose of life? Perhaps it is just to touch moments of stillness like these, to feel the connection with all living beings, to see the ever changing circle of the seasons and life, the melting of ice lakes and the resilience of small trees and creatures that bend and pop back up again on steep slopes,  to witness the tragedies and the joys of our lives, to both own and transcend them all in an ever expanding heart.

Walk on my friends. 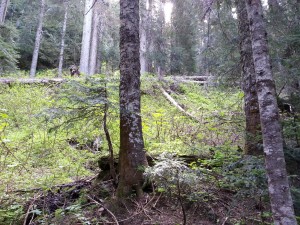