I was sitting indoors playing cards with my dad on a rainy summer’s day in Maine at the age of 12 when through the window overlooking the cove, I watched a group of older boys and girls kayaking past our cottage, heading towards the open ocean. Their smooth strokes gracefully powered their kayaks through the water and into the infinite horizon of my heart’s imagination.

Kayaking for me has always been first and foremost about touching that primordial connection with our cosmic DNA. Launching into the ocean or a river is to embrace a timeless and serene feeling, like resting in the arms of one’s original mother. Our ancestors gradually climbed out of the sea hundreds of millions of years ago. And here we are today in all our modern glory – bursting with pride at our technological mastery of the local solar system, poised to flame out as a species in monumental displays of hubris, greed, and ignorance. Mastery indeed.

“Too much energy in your country is spent developing the mind instead of the heart. Be compassionate, not just to your friends but to everyone.” His Holiness the Dalai Lama

A few weeks ago, Shell Oil Company announced it’s decision to pull out of its seven billion dollar project to open up offshore drilling in the Arctic Ocean. Pro-business naysayers cited market forces as the overriding factor, denying that the hundreds of kayakers who blockaded oil rigs and ships in Everett, Seattle, and Portland had no effect. I was on the water at all three places and felt the collective consciousness of humanity break like a giant wave on a beach encircling the globe. Everything is connected. There is no such thing as “no effect”.

“Mind is the forerunner of all things.” The Buddha

People are waking up to the precariousness and preciousness of the web of life on Planet Earth of which the human species forms but a single strand. Kayaktivism is a new form of political and spiritual expression tapping into the power and connection that we have when we set aside our anthropocentric greed and arrogance and feel the breathing of the whales, dolphins, our children of the future, the rain forests, people of all races and nations, as one. 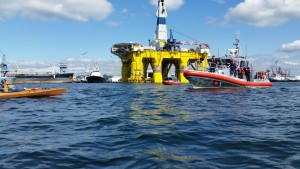 “But your fiberglass and plastic kayaks are made of oil, and you drove to the launching point in your car.”  The modern economy is a force of domination that has enslaved our world for centuries, disallowing any alternatives to thrive. Disingenuous arguments aimed at activist’s supposed hypocrisy and lack of purity ignores the simple fact that alternative energy technologies and  equitable economic social conditions have been brutally suppressed for ages. Furthermore, it might require one gallon of oil to manufacture one kayak which lasts a lifetime and requires zero oil for propulsion. That’s a pretty small footprint, at least until more sustainable materials are widely available to manufacture kayaks. 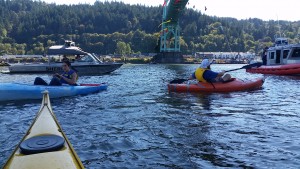 Kayaktivism is not simply an act of civil disobedience.  It is an action of planetary connection – unplugging from the dominator mind-matrix of rectilinear dualistic orthodox reality. Instead of us versus them, it’s just us. No separation. No borders. Just radical truth flowing downstream to the sea of awakening. Yes, we blockade “death star” machines and make a stand against corporate evils, but we are not against anything in the sense of cutting ourselves off spiritually from the most powerful forces at our disposal – our compassion and awareness of our interconnectedness.  Which isn’t to say that things don’t sometimes get a little heated when a 381 foot icebreaker guarded by a phalanx of aggressive cops on jet skis and speedboats attempts to ram through a flotilla of peaceful kayakers. 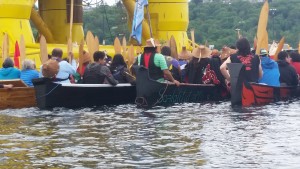 Kayaktivism is planetary acupuncture in motion, with hundreds of kayakers (and native canoes) stimulating an awakening node with their pointy crafts, opening up the stagnation blocking the channels in the collective consciousness of humanity. Kayaktivism is an act of joy and of love, a planetary baptism on rivers, oceans, lakes, wherever water offers its liquid body for us to move in communion with life.

Kayaktivism is only one strategy though, and unless we can figure out how to magically paddle across cow pastures, we’ll need a new metaphor to address a major blind spot in the environmental movement. Climate change is not simply an issue of carbon emissions following on the corporate stranglehold that the giant companies like Shell have on the energy economy.

It’s easy (and good for fund-raising) to paint a picture of evil corporate giants who are dooming our planet. It also externalizes any sense of personal responsibility each one of us has in helping heal mother earth. It’s easy to recycle, change light bulbs, maybe add solar panels and drive a hybrid, but are we willing to change our eating habits? I’m talking about the cow in the middle of the room.

If every single card carrying environmentalist gave up their own consumption of meat and dairy products, the amount of methane released into the atmosphere would drop precipitously, buying us precious time by slowing global warming, as well as healing the global ecosystem in multiple ways.  See my recent blog post about the film “Cowspiracy“. 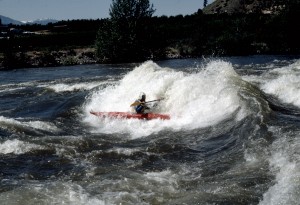 We can heal this world. We can heal ourselves. The river ahead is going to be turbulent. Can we surf the waves and not forget for a moment that everything we hold dear and precious is at stake?  Can we stretch our comfort zones and practice radical collaboration with everyone, building bridges across all interpersonal chasms. This work is messy, unpredictable, replete with doubts, fears, and unknowns. But if we remember to smile and keep paddling, we will keep arriving.