It is difficult to write about a disaster so close to home, and almost impossible to remain objective.  Everyone touched by a disaster, including responders, are to varying degrees, psychologically traumatized.  Even people remote from the scene can be affected.  On the eve of 9/11, I had just arrived in Lhasa after a 30 hour bus ride and had not been in contact with the outside world. That evening I experienced disturbing nightmares involving a plane crash. The mind is a non-localized phenomenon. Spiritually, we are never remote from disaster and suffering.

Over time, human consciousness has evolved elaborate defenses against trauma, allowing us to function in high stress environments without being overwhelmed. But our psychic armor ever has chinks. Whether we perceive our emotional vulnerabilities as defects or divine intelligence allowing truth and wisdom-light to enter us, depends upon our outlook.  What is indisputably clear is that we are emotional beings. That we are able to sometimes switch into overdrive and participate in a rescue operation is an amazing human capacity. Adrenaline and heightened focus enables us to act selflessly and decisively, to preserve and protect life.  Sooner or later though, everyone hits their wall.

Actually, this pattern is not unique to humans as there have been many reports of rescue dogs at the Oso mudslide experiencing stress, picking up the scent of human remains but unable to achieve the conditioned objective of finding a body due to the depth and compactness of the mud and rubble. The dogs need to be rotated out of service almost daily or else they will exhibit distressed behavior.

As human beings, we have no master holding our leash – except ourselves. We are challenged in the aftermath of disaster to recognize, with an alert mindfulness, the adrenaline high for what it is, a short term biological coping mechanism. Eventually, we need to time to rest and let the tears, the grief, the tangled emotions flow, so that they don’t end up permanently blocking the energy radiating from the heart petals of our spirit. The clarity of our heart, guided by wisdom, is what can save this world, heal others, and ourselves, no matter what is happening. And acupuncture has been facilitating that healing at dozens if not hundreds of disasters globally since September 11, 2001.

In fact, I believe that the power of the heart is saving the world – world being defined as not merely limited by materialistic form. A Hopi elder once told me that it is only because the Hopi continually pray for the dawn of a new day, that the sun returns to brighten the eastern sky each morning. That is my answer to the burned out environmentalist proclaiming somewhat nihilistically that the end is near. For every ending, logically, there is a new beginning. Is the cup half full or half empty? In the end, each one of us gets to choose.

I choose totally full. That’s why I’ve come here to Oso to offer acupuncture and why I rise up every morning, setting a strong intention to use my life with altruistic purpose. In a sense, Oso is a microcosm of the wider disaster of modern life we are living in every day. Runaway global warming looms large on the horizon. Fukushima and the roughly 435 other nuclear power plants globally, are ticking radioactive time bombs, already influencing our DNA as we speak. Economic systems and safety nets are breaking down. Water and affordable food is increasingly scarce in many countries. And billions of humans are feeling the pinch. Some people bury their heads in the sand. Some donate to the Red Cross. Some rejoice at the heroic actions of rescuers. And some leap into action during natural disasters in order to participate in altruistic endeavors. And there are many other possible responses often mingled together in one mind-heart, none of the motivations of which can be seen or judged by others, but only examined and acknowledged in the quietude of one’s personal reflections.

A few days after a million tons of mud, stone, and wood slid down a steep hillside above Oso, claiming 36 lives (8  still missing) and burying a square mile of land up to 65 feet deep, Dr. Bill Wulsin, N.D. MPH, L.Ac. phoned me and invited me to collaborate on an acupuncture response. I had just finished my final exams and was comfortably at ease, like a surfer drifting on the ocean between sets, waiting for the next group of waves to arrive.  There it was and it was a big one.

Returning from our first day of treating responders and community members at the Oso Fire Station, I began reaching out to my colleagues, setting up the Facebook page – Acupuncture for Oso, and with Bill’s help, establishing daily acupuncture on site in Darrington, Oso, and Arlington.  In the past three weeks, our team has offered close to 250 stress reduction acupuncture treatments. I share this not with any intent to boast, but to shed light on what is possible when we work together.  And in any case, all praise must rightly go first to my parents, my teachers, and a vast network of colleagues – my role is quite small, a drop of water pulled downstream on the currents of an infinite river. Most notably, I acknowledge the compassionate contributions of Melanie Rubin of Acupuncturists Without Borders, Elsa Del Toro, L.Ac., Dr. Cole Alexander (DAOM), Dr. Susan Friedrich (DAOM), Brenda Loew, L.Ac., and many others too numerous to mention. 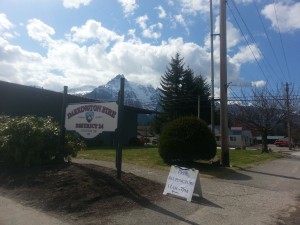 With a small amount of training, anyone can play a helping and healing role in the aftermath of a disaster. It never ceases to inspire and amaze me when I remember the everyday heroism that is contagious in places like New Orleans after Katrina, or Port au Prince after the earthquake, and now Oso. My friend and colleague Brenda Loew writes:

” We treated 9 adults today including the Oso Fire Chief who has been working 15 hour days in the mud and water. He relayed to us the intensity of emotions that he has been forced to keep under wraps in order to execute his responsibilities, expressed appreciation for our work providing stress relief, and recognizes that a great deal more work lies ahead as the community comes to terms with the immensity of their loss and grief. (Within the Fire Department alone, the Oso Fire Commissioner (hospitalized with a fractured pelvis)  lost his wife in the slide and the Oso Fire Captain lost his wife and grandchild as well in the mud slide.) A few other men we treated today were sawyers who continue to volunteer their time and great skills on the pile. Last Sunday we had heard the emotional story of a young man who had found the body of his father which had given him some level of emotional closure.”

It is also sobering to reflect on how tenuous our breath in this life is. One moment here, the next, who knows? But rather than resign ourselves to fate, given the likelihood that Seattle will face a major disaster sometime in the future, let us prepare ourselves so that we can work together, minimizing suffering and loss of life.

1 thought on “Lessons from Oso”