A confession here – I carried no map and no headlamp, though I did have plenty of food and enough warm clothes to stay warm if for some reason, I had to huddle for an evening by the trail. There’s a certain freedom – not without obvious risks of course – in being a nameless being in a nameless land. The mind easily enters a state of profound clarity and awareness of interconnectedness with all life, unencumbered by conceptual dust. 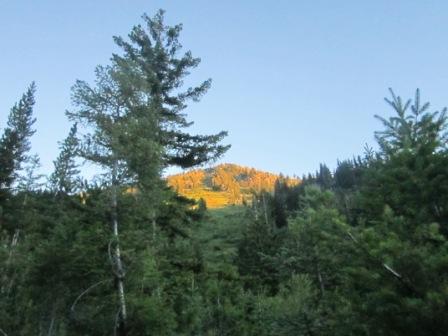 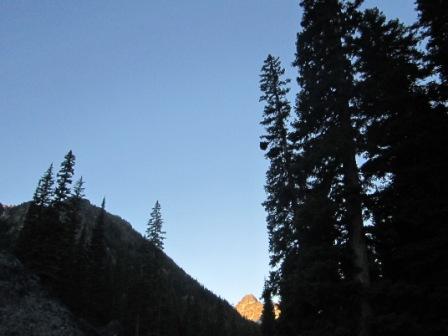 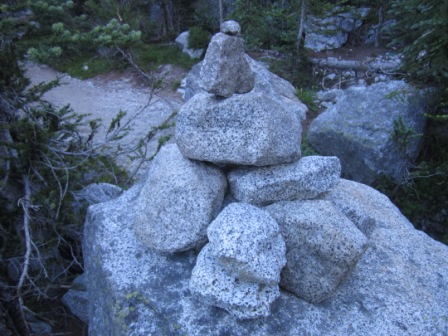 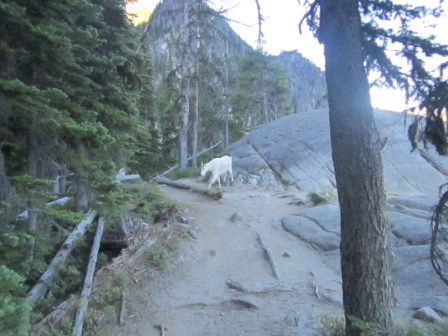 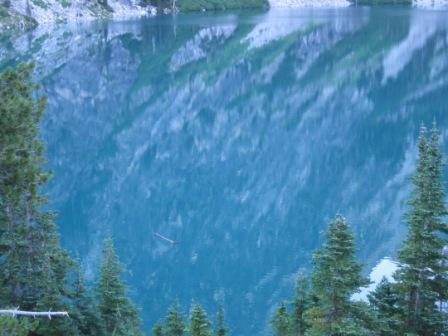 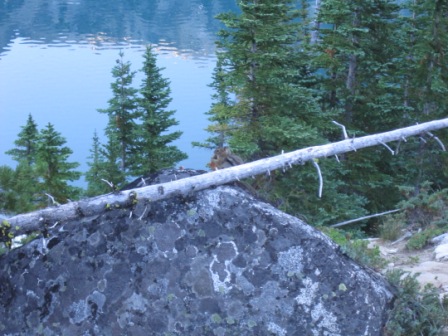 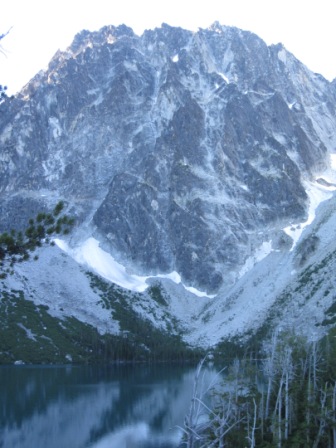 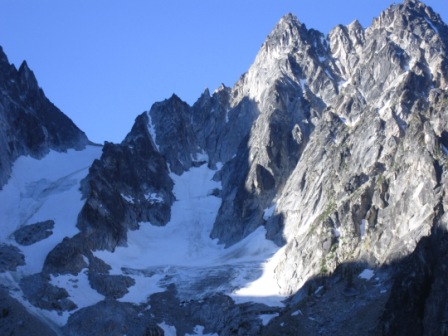 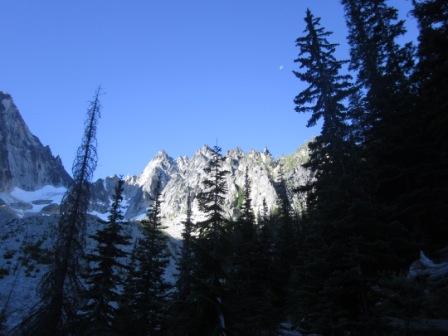 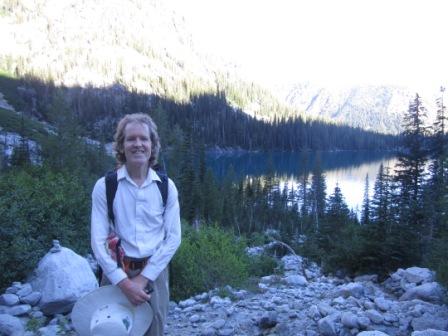 ready for the job interview with Buddha 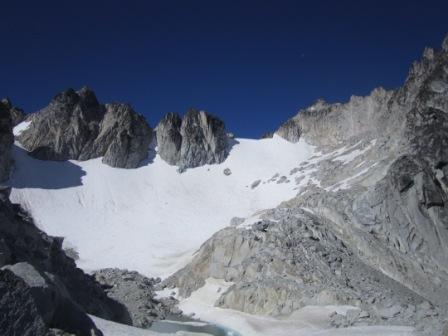 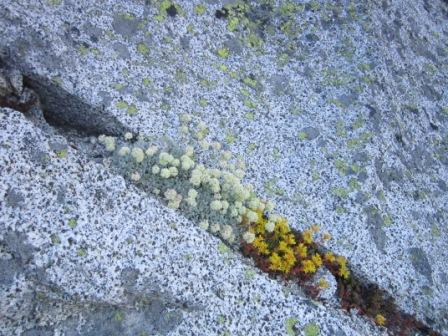 Offering to the gods 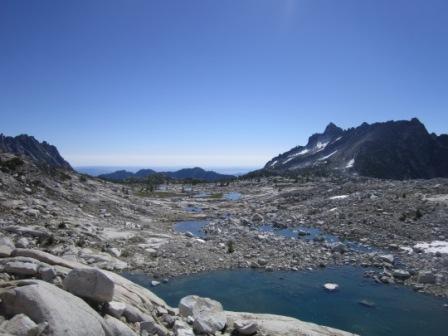 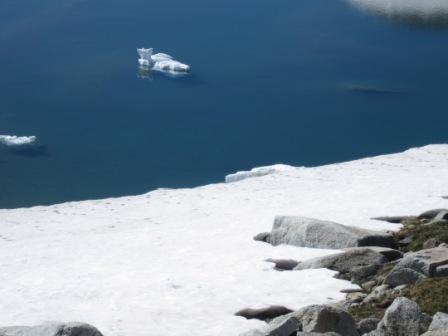 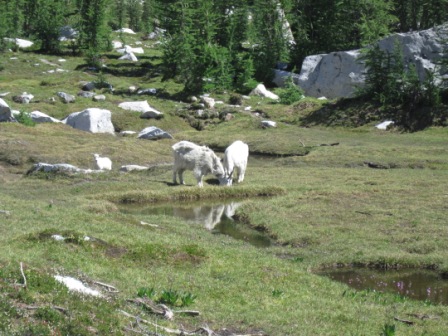 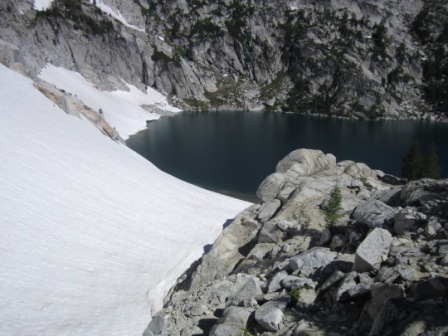 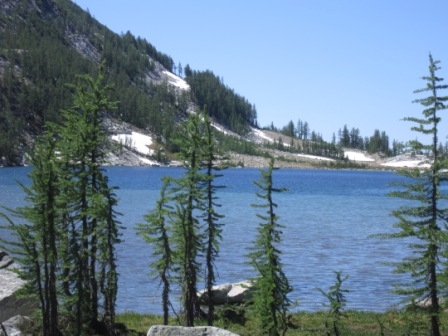 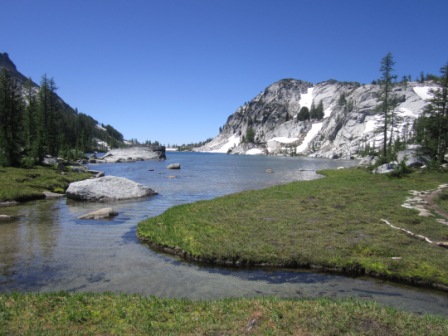 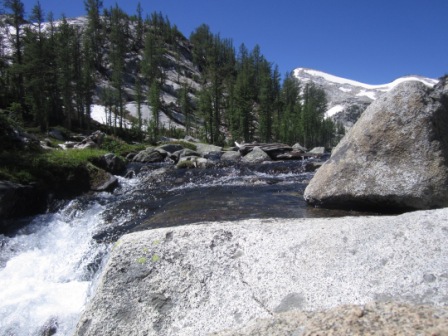 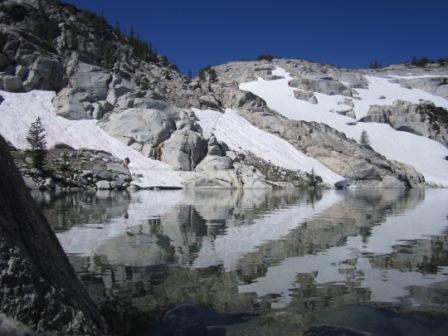 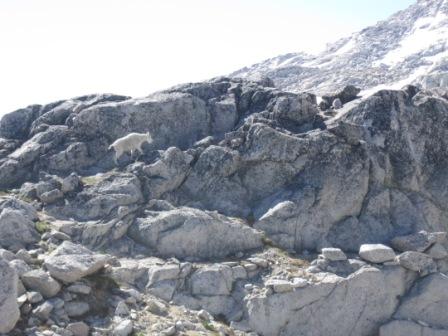 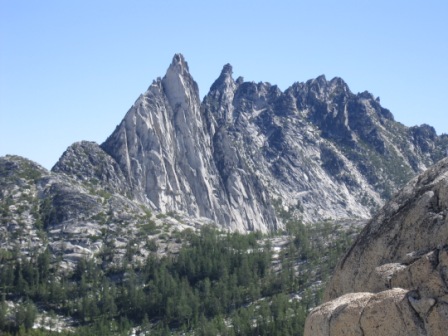 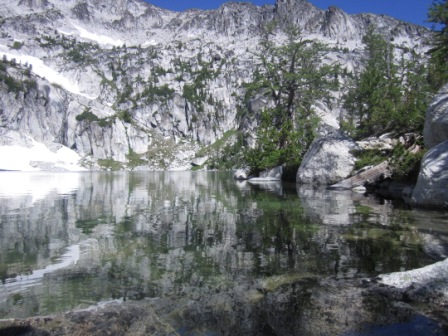 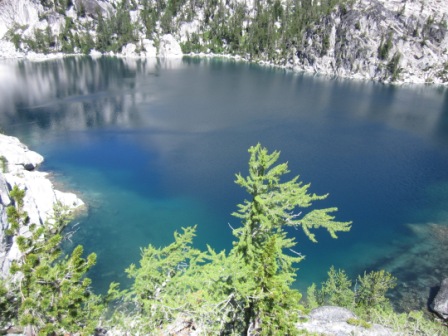 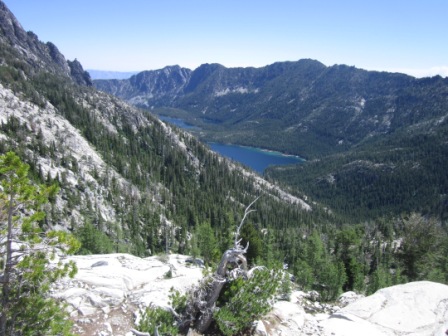 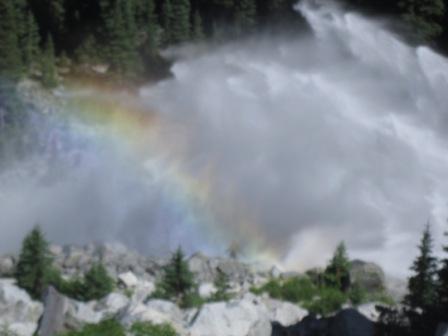 Rainbow man – This photo of the plume of water from the Upper Snow Lake drainage pipe (personally I think this was a very dumb idea) captures a hiker basking in the pot of gold at the end of the rainbow. 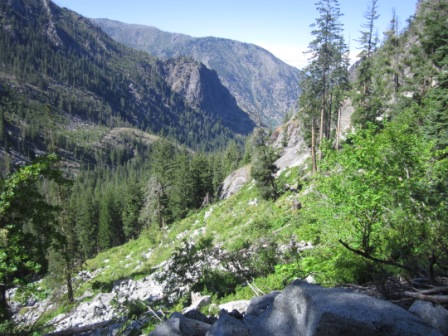 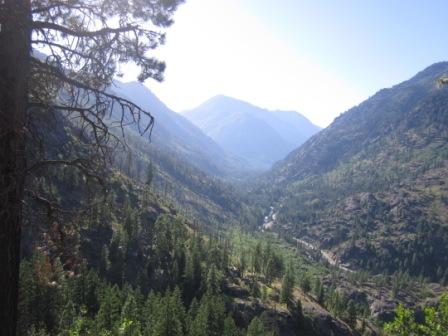 5:45 p.m. Photo from the descent down to the Snow Lakes trailhead parking lot, looking up the Icicle Creek drainage. The prominent left fork in the valley four miles distant – where I started in the morning, goes up Mountaineers Creek towards Colchuck (and Stuart) Lake.

With only one day to play, I decided to make the most of it. Arriving at the Colchuck Parking lot (elevation 3300’) at 7pm after a carbo loading dinner at a Mexican restaurant in Leavenworth, I organized my gear for an early morning start. A quick breakfast of homemade granola and almond milk, I was on the trail at 4:50 a.m. Two other parties had left in front of me with headlamps, while the first minute under the forested canopy was somewhat dark, my eyes quickly adjusted and with the moon was shining brightly and the dawn growing, within 15 minutes, there was plenty of light.

Met my first mountain goat on the trail before dawn. He was as surprised to see me as I was him. I stood still for, sang a little song to him, and he resumed munching his breakfast as I continued the ascent up to Colchuck Lake, reveling in the rising sun as it touched the peaks. I arrived at Colchuck around 7:00 a.m.. A few tent beings were still sleeping as I tip toed past their camps, and continued around the right side of the lake. Here the trail gets a bit sketchy in places and route finding skills are paramount.

Dragontail and Colchuck Peak were spectacular in the dawn light. At the sound end of the lake, beneath the towering peaks, the boulders get very large and it is important to look for cairns to guide one as efficiently as possible through the maze of granite rubble. Ascending up to Aasgard, again one needs to carefully follow the cairns as it is easy to get off route and before you know it, you find yourself bouldering on very steep wet rock – not a comfortable situation.

I had an open ended plan to hike to Aasgard, and then possibly head to Dragontail based on post two weeks earlier in the WTA trail report which mentioned that the scramble to Dragontail peak “was relatively easily”. When I reached the Pass (10:30 a.m., 7841’), I realized that statement needs to be taken into context – easy if one has an ice axe and is experienced crossing deep steep snow fields with possible crevasses, etc. I had no ice axe, so I quickly abandoned that plan, and gazing out across the vast bowl of granite, snow and sun dappled lakes stretching away east, I decided to hike the rest of the circuit. A confession here – I carried no map and no headlamp, though I did have plenty of food and enough warm clothes to stay warm if for some reason, I had to huddle for an evening by the trail. There’s a certain freedom – not without obvious risks of course – in being a nameless being in a nameless land. The mind easily enters a state of profound clarity and awareness of interconnectedness with all life, unencumbered by conceptual dust.

And life there was plenty – flowers, goats, rock, and a dozen or so people over the course of the next few hours. I paused for five minutes here and there to take a sip of water, nibble at my bag of figs and dates. Goats were frequently encountered in the upper Enchantment basin. Mostly, I kept hiking though, not sure how many miles remained and wanting to finish with enough daylight to successfully hitch a ride back up to the Colchuck Parking lot. Descending from Lake Vivianne, I lost the trail for about 15 minutes and was loathe to hike back up to the last cairn as I had already downclimbed through some very steep terrain. Perhaps someone had accidently knocked over a cairn – this was a difficult stretch to follow. Note to self – in the future, don’t lose the trail! Looking at the topo map (on my computer the next day), I realized now, the trail made a long switchback to shed the vertical gradually. I guessed (fortunately correct) that by keeping the outflow creek of Lake Vivianne close to my right, I would eventually meet back up with the trail, which I did.

Passing through the Upper and Lower Snow Lakes was like heaven. High above, three paragliders were floating dreamily thousands of feet above, riding the afternoon thermals and gradually steering down valley. The shade of the forest was cool. A steady breeze kept the bugs at bay, though if you stopped in some sections for more than ten seconds, you soon had a job brushing them aside. Wielding my wide brimmed hat, I swished it back and forth and kept them from landing without harming my insect cousins. My knees and hips, aching after all the down climbing, were soothed by the level terrain along the lake shore. Unbeknownst to me, I still had roughly 4200 feet of bone jarring vertical to descend. I was also running low on water and had no way of purifying the lake water. After leaving Nada Lake, the trail crossed over to the sunny side of the valley and it was getting hot. I was delighted to find ripe thimble berries along the trail for several miles.

My heart sank when I saw the parking lot and I realized how far down I had yet to climb. I arrived at Snow Creek Parking lot (1200’) at 6:10pm, my left knee in considerable pain, and caught a ride within 15 minutes back to Colchuck trailhead. 4400 elevation gain, 6600 descent. 13 hours and 20 minutes including about an hour for food/water/rest stops. Home in Seattle, a warm bath with a few pounds of Epsom salts added and Monday morning, I only limped a little bit, my mind was still bathed in alpine beauty.