Why go? I go to the mountains for meditation and healing, for solitude and beauty, which is all around, though too often unnoticed in the hectic modern urban pathways we often follow. Smartphones in hand, we rush like automatons towards our death, clicking here and there, never pausing to see the flowers, or so it often seems. We may be passionate about social justice but in our push to fix the world, do we slow down enough to realize that our work for peace is realized only to the degree we have internalized that peace ourselves. Yes, active engagement in movements for social justice – which can take many different forms – is essential, but not at the expense of connecting with ourselves in a deeper spiritual way.  Pause and look around on a street corner. More often then not, someone, perhaps several people, perhaps nearly everyone, has their smart phone in hand, eyes glued to their machine. We live in a time of distracted attention and over-stimulation. We overthink situations,  having forgotten how to be with them in less cerebral ways. I am not talking about anti-intellectualism, the dumbing down of America, which is a different problem, but this obsessive living in our heads without feeling the divine presence, the emptiness of self from which all healing and awakening becomes imminently possibly.

The meditation is not merely the experience of quietude and being in the moment, it is also about the degree of skill with which one accomplishes a task.  Mountaineering demands a very high level of perfection and can levy severe penalty for sloppy execution of a plan. My  plan for this trip began a year ago, a few days after the ache in my joints had worn off and I realized that I had to go back to the Bailey Range, deep in the heart of the Olympic National Park wilderness.

Going Light.  I looked over my gear with an eye to traveling as light as possible – only the bare essentials.  For example, in trying to decide whether to bring two fuel canisters instead of one, reading the product data,  I found that they boil one liter in 4.5 minutes, with a total burn time of 73.6 minutes, which divides down to at least 16 times boiling one liter. And considering that most of my freeze dried meals only required about a half liter of boiled water, one canister should suffice for approximately 32 meals or conservatively 10 days.

I also decided not to bring my Katadyn water filter (11 ounces). I’ve never experienced any ill consequences from drinking from streams in the Elwha, using common sense to observe for signs of humans and herd animals, and choosing running water, over pooled water. Instead of bringing a water bottle that weighed 7 ounces empty (!), I chose two small plastic juice bottles that weighed one ounce each. Instead of taking my Samsung Galaxy camera that weighed 6.7 ounces with case and an extra battery, I took a GoPro Hero Session camera that weighed about 4.7 ounces (without the mount). I tied a heavy cord and threaded it through the frame holes so I could loop it around my neck.

More logistics. I studied maps, looked at a couple of different webcams (Hurricane Ridge, Elwha River cams), observing snow pack, stream flow, and weather data.  And I also did a dance between my family, and work schedules, finally settling on July 2nd as my departure date.  Having spent a considerable amount of time over the winter being involved in various campaigns to stop fossil fuel infrastructure and transition towards a sustainable energy economy in line with the Paris Climate accords, limiting CO2 and global warming, I decided to not use a car. I built a special pack carrier for my bicycle, and rode to the Amtrak station in Seattle, where I caught a bus with a bicycle rack to Port Angeles.

Arriving there around 5pm. From there, I caught the number 14 “Forks” bus which dropped me at the intersection of Highway 101 and Olympic Hot Springs Road.  From there, it was a nine mile bicycle ride (~500 feet of elevation gain) to the Whiskey Bend trailhead. The last seven miles was a glorious, car free dirt road due to a winter flood closing the road to cars. I stopped at the site of the former dam to cook dinner. I would need the carbs for the 15 mile hike to the Scott-Ludden saddle the following day.

At the trailhead about 730pm, I put my cell phone and spare battery (6.7 ounces less to carry!)  in a plastic bag and hid it under a log. Locking my bicycle to the wilderness kiosk, I hefted my pack over my shoulders and began walking, drinking in the beauty of the forest in late afternoon sunshine, the only sounds – my breath, my footsteps,  the wind and the birds singing from their evening nests.  What will the next moment bring? Tomorrow? No answer. It cannot be known. I have arrived home at last again.

I spent the first night in Michael’s cabin. For anyone in the National Park Service reading this, in the morning, when I was leaving, I read your fine print notice which said “No camping within one hundred feet”, does sleeping inside the cabin count as “camping”?  In any case, the door was wide open when I arrived, and the many mice scurrying about the building at night didn’t seem to mind my presence. I left in the morning, having heard no boots on the trail at night. In fact, I saw no humans for the entire two days of my hike, though I did notice that someone had worked on the trail in the past  year, clearing blow downs. New ones had replaced those cleared, but all in all, it was a glorious, albeit long slog up the Dodger Point trail (elevation 900′) up to Dodger Point meadow (5300′).

Having studied the maps carefully beforehand, I knew there would no water from the bridge until approximately 3600′ (just past the sign “3500′ Elevation, No Open Fires Beyond This Point”.  Having meticulously weighed and reweighed my pack to the point where 5 days of food and gear was 25 pounds – I followed the sage advice of other experienced hikers who plan their water stops so as to minimize carrying water.

I had been hiking a few hours.   I have nothing to tell time with. From the angle of the sun, I figured it was close to 10:45 a.m. Why not cook lunch and take 4 ounces of free dried vegan food off my back and put it into my stomach instead? Oops. I ate oatmeal with my spoon back at Michael’s cabin, but now, it is nowhere to be found. Although I had chided myself for not leaving my plastic tire lever (5 or 10 grams in weight?) back at my bicycle, I now remember that once before it served as a useful backup eating utensil. 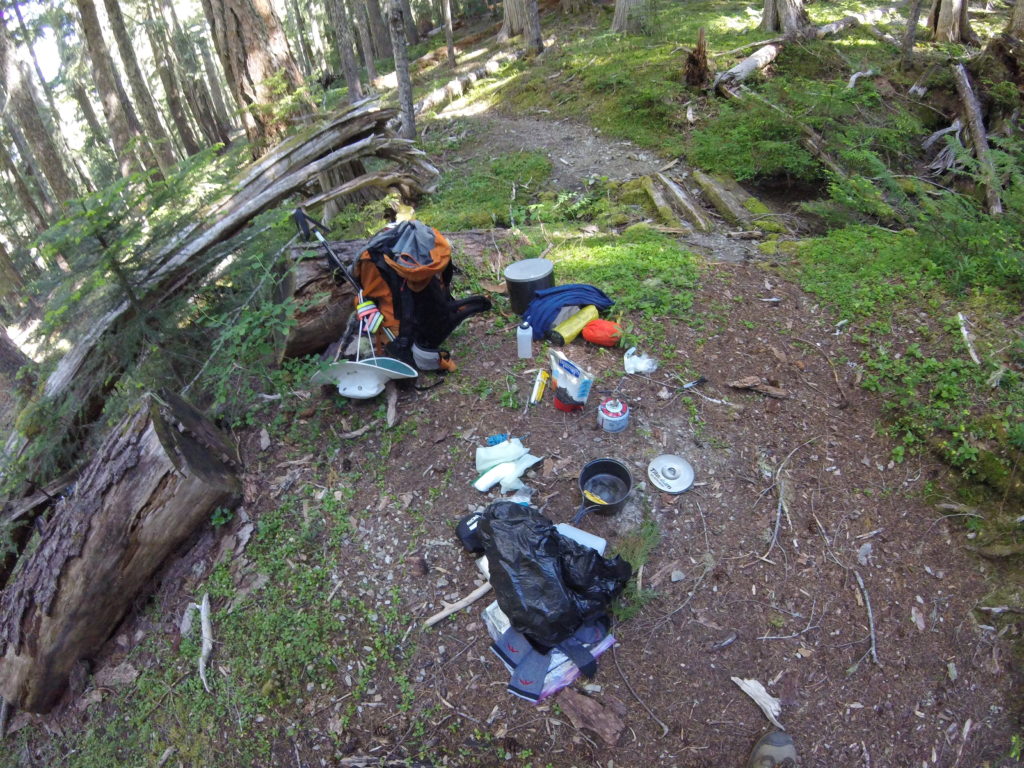 I laugh it off, also realizing that I can simply tip the package and slurp the hot food, which is surprisingly tasty. However, I also note that my seemingly insignificant error rate is mounting – yesterday evening, I knocked over the pot of water, as I was preparing to boil it.

And I am now wondering about the flint fire starter striker I recently purchased which is surprisingly difficult to use. The importance of testing one’s gear before setting out can’t be understated. Many small errors cumulatively can result in tragedy in the back-country. And so it is with life, the attentiveness, the sensitivity and awareness we bring to each moment plays a large role in our experience of life, and that of those around us.  Small seeds can produce a giant result. Karma in a word.

I bicycle the 9 miles down to Highway 101 and wait about 45 minutes for the Forks bus back to Port Angeles, suddenly realizing that due to the holiday, there will be no bus. The first hill is a long one up out of the Elwha, but soon I pick up the Olympic Discovery Trail and with a 20 mile an hour wind gusting at my back, I am in Port Angeles within an hour, checking in at a cheap motel for a hot shower and soft mattress.

Sharing Space with Humans Again. I board the bus in Port Angeles at 6:00 a.m. for a three hour ride back to Seattle.  A man in his twenties in the other corner of the back row, sleeping with his feet up, taking up nearly three seats. Before departure, the bus driver asks him to sit up and put on his seat belt. In Sequim, a woman gets on board and after pausing to think, sits next to me.

The man has suddenly moved over one seat towards the middle, leaving an empty seat on his left – he thinks he is clever….he will get the woman to sit next to me, and then, when the bus driver is no longer looking, he will lie down again, put his feet up and take up three seats. I say to him in a polite but matter of fact tone – “hey, if you sit next to the window, then all three of us will have an equal amount of space”.

He scowls and literally growls at me, but moves over. I strike up a conversation with the woman in friendship, to let her know that this is about fairness and not me rejecting her. At the Edmonds ferry, I see that the man is now sleeping again, with his boots jammed against the woman who has said nothing. I am only guessing that her internalized female oppression prevents her from speaking out for her rights. I get up and walk up to tell the bus driver what is going on. I can’t allow such disgusting abuse to go unchallenged. The bus driver tells the guy to sit up or get off the bus. Later, the woman thanks me and we connect on a heart to heart level.

References: Olympic Mountain Climbing Guide, 4th edition. (OMCG) Seattle Public Library has a few copies, or you can purchase from your local bookseller, or from Amazon.

*Note that with any of the following photo blogs, conditions will always vary from season to season and time of month. Consult recent trip reports, park ranger staff, weather conditions, and other current seasonal information sources:

**As with any information derived from the internet, use your own wisdom. All responsibility rests with the reader. Do not construe anything mentioned here as medical advice, or any other kind of advice.