I can only dimly imagine what it must have been like for our elected Congressional representatives on January 6, 2021, ordered to lie on the floor and prepare to don a gas mask, with the sounds of gunfire and an racist armed mob echoing in the cavernous hallways of the US Capitol building. I think most of us, placed in a similar situation, would have experienced some level of fear. Fear is a primal response, a doorway to action.  Whether we respond skillfully or not, first depends upon recognizing the fear, and bringing awareness forward from the brain stem to the reasoning centers in the frontal cortex.

Twenty years ago, I was riding second class on a train in India with my wife, after visiting Buddhism’s most holy site – the Mahabodhi Stupa at Bodhgaya. Riding second (or third) class on a train in India is an eye opening experience for a privileged westerner, not accustomed to being forced to directly confront poverty, cacophonous noise, exceptional kindness, or the unexpected at any given moment.

It was early evening when we rolled to a stop in Lucknow, a major city halfway between Patna, where we boarded, and New Delhi. Our train compartment seemed to hold about 15 people – I don’t remember exactly. The assigned seats were rigid benches and there were people lying down on bunks above and across the aisle. My wife was sitting directly opposite me, and both seats beside us were empty, when in walked two large men. A tall clean cut, uniformed soldier sat down next to my wife. As he sat down, he placed his rifle between his legs in front of him. He held a thick rope, appearing to be hemp, one inch in diameter. The other end of the rope was tied tightly around the wrists of the burly, grizzled man sitting next to me.  I glanced at him quickly and then away, his cold steely gaze immediately gave me a feeling of unease.

The mood of the compartment had shifted. The conversations were whispered now. There was an atmosphere of tense watchfulness and heaviness, like the night time fog of the Indian winter. Late in the evening after a brief catnap, I nodded awake and noticed that the compartment had become completely silent. The Indian guard was snoring, head down, with the soft spot behind his chin insanely resting on the barrel of his rifle. Was it loaded? 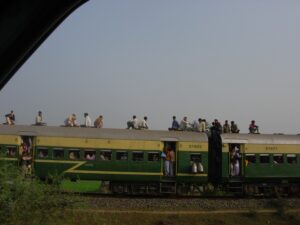 I slowly turned my head to the right, pretending to be casual, and noted that all of the Indians on the upper bunks were wide awake, staring down in silence towards us with big eyes. The man with ropes around his wrists was alert. I sensed his energy somehow – it felt like a storm that had been long brewing. There was fear in the compartment. Was a violent scene about to unfold? I looked at my wife and imagined her waiting for me to somehow break the tension. Not even knowing whether my seatmate understood English, I turned to him, looked him in the eyes, and calmly asked him “What did you do?” Not the most skillful opening line admittedly, but in the heat of the moment, it’s the best i could come up with.

In retrospect, those words, in another context, could’ve easily been received as an aggressive attack on someone’s privacy and dignity, with all the racist prejudices of the criminal justice system, but coming from Bodhgaya, having been blessed by the bodhisattva spirit of Buddha’s enlightenment, my intention was nothing other than seeking connection and offering love. Still, the response indicated that he was not quite ready to drop his defensive ego barrier just yet, and I would need to tread carefully.  His one word answer, delivered with the same steely gaze: “Murder”.

I don’t remember how the conversation evolved from there. Quite probably there was a pregnant pause after his initial response, but eventually it emerged that he had been in a gun fight, had shot and killed another person, but was himself suffering from a recent gunshot wound.  And there I saw my opening. I asked him if he was in pain. His expression immediately softened. I told him about directed Qigong healing and with his permission, he allowed me to place my hands near his body, directing my Qi (life force) with healing intention. At some point I think everyone fell back asleep, including the prisoner, and the next time I awoke, the two men were no longer on the train. 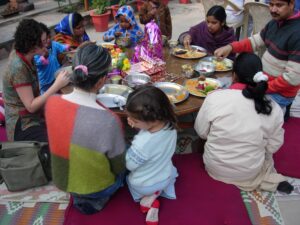 In these unprecedented times of violence and ecological unraveling, we have choices on how to respond. We can run away in fear, deeper into our consumer habits (which feed the cycle of violence on Mother Earth), or we can step back from conditioned responses and take another path. We can reach out across the aisle, to the person next to us, across the ideological fences we’ve built up over centuries and millennia.  To do that skillfully, we first need to pacify our own heart, recognizing how interconnected and fragile all life on this planet is, and how dangerously close we are to an ecological precipice. It is possible, we may not be able to stop near term human extinction from occurring. We need to courageously face that possibility in order to live our lives with meaning and purpose. Regardless of the fate of the world, together we can still create something beautiful, endeavoring to save what can be saved, and in the process, creating a loving energy and brilliant awareness that will continue radiating outwards into the darkest reaches of infinite space.