I just saw the film “Screenagers” which delves into the topic of how digital media is changing our children across a wide spectrum of indexes – from academic performance, emotions and mood, to incidence of violent versus compassionate behavior, and even changing the response thresholds of neuro-chemical pathways in the brain.  If you have a child or teen, this film is a must see.

As more and more children access digital screens – cell phones, computers, tablets and an array of other devices, our society has entered a brave new world – a world of profound imbalance – ecological, economic, social – requiring critical healing focus, just as an entire generation of children are being ushered into the infinite alternate realities available via the internet and video game entertainment. And the migration away from reality into fantasy or distraction is fueled not only by our children’s fascination with devices, but our own.

I believe it is possible to reverse this trend – to reclaim a family life rooted in love, understanding, and connection, but first we need to start unplugging ourselves a little more often, putting our own devices aside, peering into the eyes of our loved ones with curiosity and wonder, and having actual conversations based on the resonance of our vocal chords instead of the rapid fire motion of our texting thumbs.

As neuroscientists are beginning to understand more clearly, the human brain has evolved over millions of years to seek novel stimulation. In the distant past, this enabled us to anticipate predators in the jungle, and to survive in the wild. Now that we have cleared most of the jungles for cattle and incarcerated in zoos most of the remaining predators who haven’t gone extinct, what to do with these super computers in our frontal cortices?  Plug in and zone out? Or unplug and zone in? The choice is ours.

Okay, I have a smart phone too, and a computer (I’m typing now). I’m attending Break Free next weekend, a massive global organizing feat to combat the roots of climate change which could not have been planned without digital communication.  The internet is the world’s largest library with instant accessibility – the digital divide not withstanding. Some of my daughter’s first internet searches were for origami projects which now adorn the ceiling of my acupuncture clinic.  Technology is a tool. Intention and mindfulness determines how it is used. 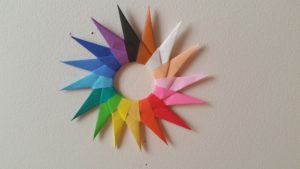 However, it is also true that narrowing the digital divide isn’t the only factor in helping children achieve success in life. We need parenting practices and resources to help our children navigate the perils of digital technology.  For example, research has shown that children from low income families are more likely to develop unhealthy habits such as video gaming addictions, thus perpetuating the cycles of poverty and racism (since lower socioeconomic status and race are often linked).

Further, extremely violent and misogynistic video games like “Grand Theft Auto” are linked with more violent behavior such as mass shootings (which I would note as an aside, are generally committed by white males).

Love and wisdom are the key ingredients of a harmonious individual, family unit, community, and world. We have these qualities and potentials within us. To nurture them in our children, we can’t deny their desire to socialize and connect via social media, or to experiment with games. We already know that abstinence policies regarding sex fail miserably – so how can we expect it to work with digital technology?  What is needed are loving, but firm guidelines that are enforced, utilizing written contracts and continued conversations with our children.

The frontal cortex continues developing until roughly age 25. What this means is that decision making, particularly in a rapidly changing society, is an experiment in trial and error.  While there is a plenty of evidence that mistakes are a necessary and even beneficial factor in learning, unfortunately mistakes in the digital world can sometimes have life long negative or even tragic consequences.

Go see the movie. Talk to your kids. We can co-create a world in balance if we would just slow down and pay a little more attention to the present moment. Peace!

*Here’s an example of a written contract compiled from several different sources. It is highly redundant, which is okay. Mistakes will be made, so why not offer multiple perspectives and review your own contracts in conversation with your kids again and again in an atmosphere of supportive learning.