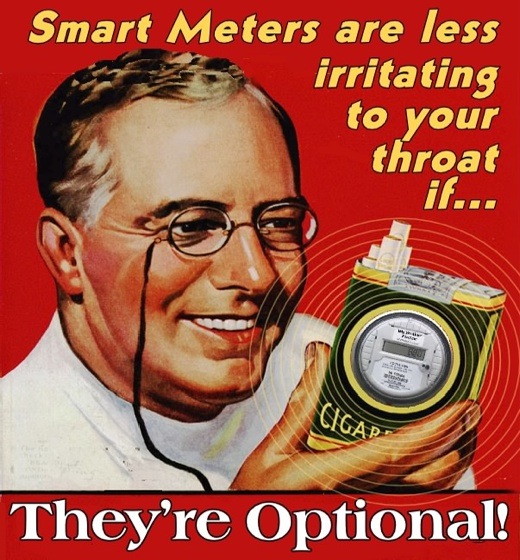 Less than two years ago, I made a $30,000 investment in solar power for my home, trying to be a good citizen and to do what’s right for the world in the age of climate change, and also, doing right for Seattle by mitigating City Light’s need to purchase expensive power on the open market during peak power usage periods. Yesterday, Dan Langdon (206-727-8777) at Seattle City Light informed me that my participation in the solar net metering program makes me ineligible to opt out of their impending “smart” meter rollout. Why? The short answer is that it’s simply not convenient for City Light.

When I signed up for a solar power system, I did not sign up to receive a smart meter. This is being imposed by a heavy handed bureaucracy pursuing goals which are not principally in the interests of the public ratepayers, but instead, the interests of corporate lobbyists, and government bureaucrats.

A couple of things seem clear: Seattle City Light wants to be able to say publicly that there is an opt out program, but in actual fact, they are making it extremely difficult if not impossible  for people to actually opt out. People living in apartments also are not eligible to opt out. (Hey apartment dweller, you may wish to check to see if you have a bank of twenty of these pulsing on the opposite side of your bedroom wall.)

According to a public records request, with very little advance publicity, 530 public comments opposing City Light’s opt out policy were received by them, and yet there has been no acknowledgment of any of those 530 comments. It seems they are being swept under the rug in an effort to push forward on the overall smart meter program before the distractions of the city budget and presidential election seasons have subsided and rate payers are suddenly face to face with the reality of the smart meter boondoggle.

While many have written and spoken about the foolishness of smart meter programs: They are a cleverly packaged greenwash, pushed by federal subsidies at the bidding of corporate lobbyists.  They save very little power. Cost overruns and project failures are the norm. They will leave the electrical power grid vulnerable to cyberattack (today a DNS attack on the east coast had a huge impact on the internet).

Insurance companies increasingly refuse to insure customers against anything to do with radio-frequency radiation (RFR). The health effects of RFR are significant when one examines the research from independent (non-corporate funded) scientists.  Smart meters represent a significant 4th Amendment privacy invasion – power companies will collect “granular” data about household energy consumption, a marketing bonanza which has already been exploited by California power utilities caught selling such information to third party private vendors.

All of that aside, despite the obvious flaws in the smart meter program, the Seattle City Council’s intent seemed clear when they stated that an opt-out program for consumers should be part of the package.  An analogy of the logic of opt out that applies here: When any technology company offers a software update, consumers are given a choice to agree to the terms or, if they do not like the terms, they do not have to download the update. These are standard contract terms for a democratic society.

Despite my opposition to the smart meter program, I naturally believed that when the opt-out program was announced, I would be eligible to opt out.  After all, I’ve already been self-reporting on meter reads (as directed by City Light) on an annual basis and could easily do this on a monthly or bi-monthly basis, simply by taking a photo of my entire meter (as I have been doing) and sending it in via email, paying a fair and modest opt-out fee in order to preserve my right to choose what technology is attached to my house, making my own informed decisions about the risks and benefits of a technology.

Acknowledging the controversy surrounding the vaccination issue, our state legislature has refrained from imposing mandatory vaccination laws. They have collectively reasoned that such a decision – to vaccinate or not – is best left up to families, based on the unique health situation and values of that family, without having them imposed by an authoritarian government. Smart meters, with their significant threat to health, their invasion to privacy, their risks of fire and electrical damage, etc. pose similar risks. If people want them, they should be free to choose, but nobody should be forced to accept one. Such basic freedoms are fundamental to a democracy.

Join the Resistance. To learn more about the “smart” meter issue and in particular, how to join forces with others in Seattle opposing “smart” meters, visit the website of the Safe Utility Meter Alliance NW. We need your support and advocacy! Write or call the City Council today. In closing, even if you disagree with one or several of the many reasons that activists have identified as to why “smart” meters programs are flawed, you owe it to yourself to at least follow the money. Once you see what a ride city ratepayers are being taken for, and recognizing the urgent unmet social needs that exist – schools, housing, transportation, etc. I think you will agree that there are far more important programs deserving of our finite financial resources. Thank you!