Only a month ago, after a 2 day hike out to 3 Prune Lake and back (~22 miles), which brought up health challenges, I decided to return to the same beautiful area of Olympic National Park in order to complete the Skyline loop. Our planned itinerary was out the Big Creek Trail to Three Prune (camp 1), Lake Beauty (camp 2), Sixteen Mile Camp (camp 3), and back to the car on day 4. Total distance is approximately 45 miles with more than 10,000 feet of elevation gain. My daughter joined me as my courageous hiking companion for a father-daughter precious moment in time before her transition to college.

We slept in the back of the car and were on the trail just after 8am amidst giant old growth trees, ethereal mist, and utter silence, punctuated by the occasional bird call. Another hiker once remarked about the North Fork trails – “roots and rocks”. If you take your eyes off your boots for a moment, easy to trip, but what life dwells on the fringes of the trail – baby toads hopping and slugs! I had promised my daughter that there would be blueberries almost the entire distance and we began grazing immediately. Huckleberries, salmonberries and thimbleberries were also abundant. 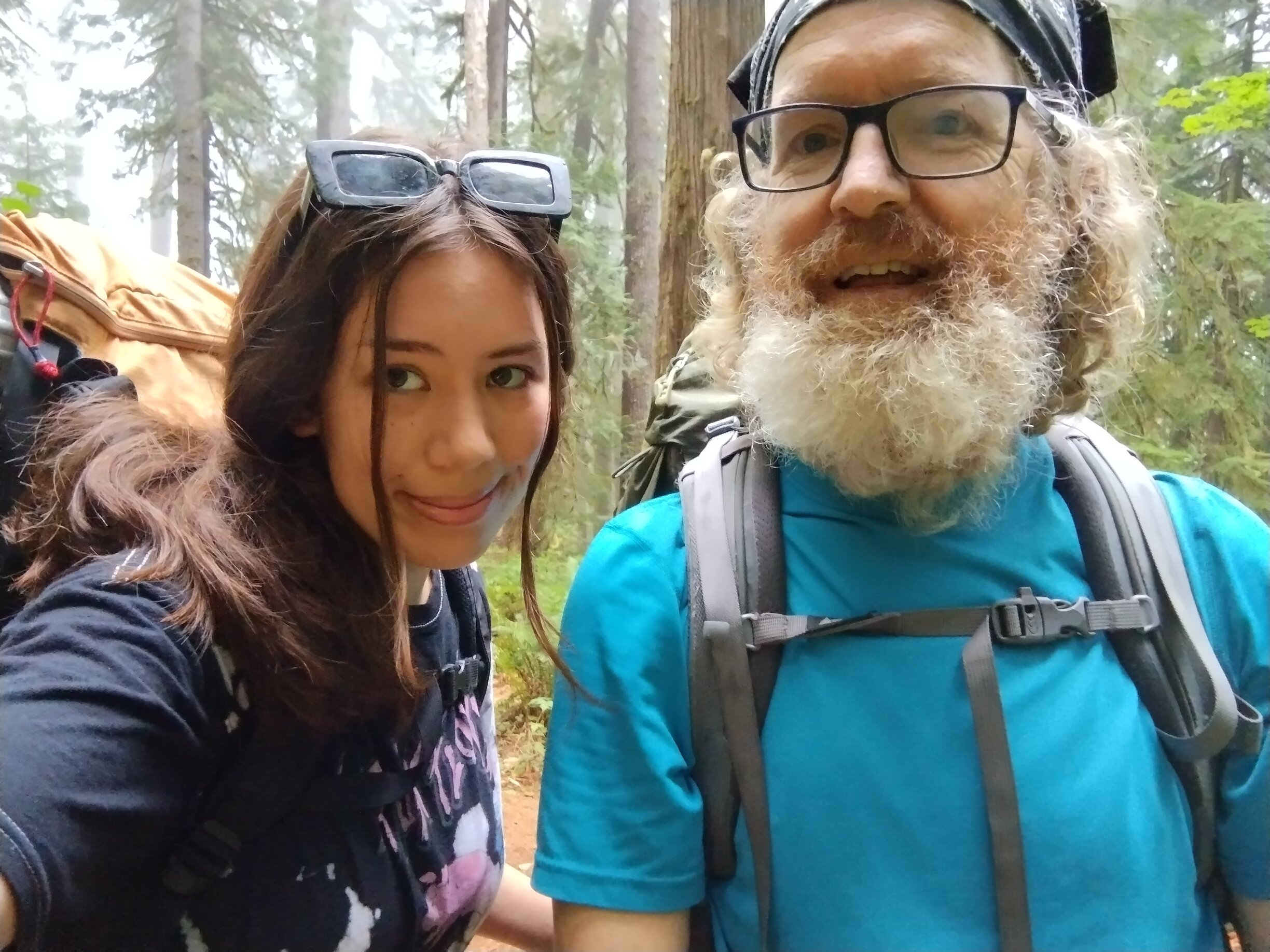 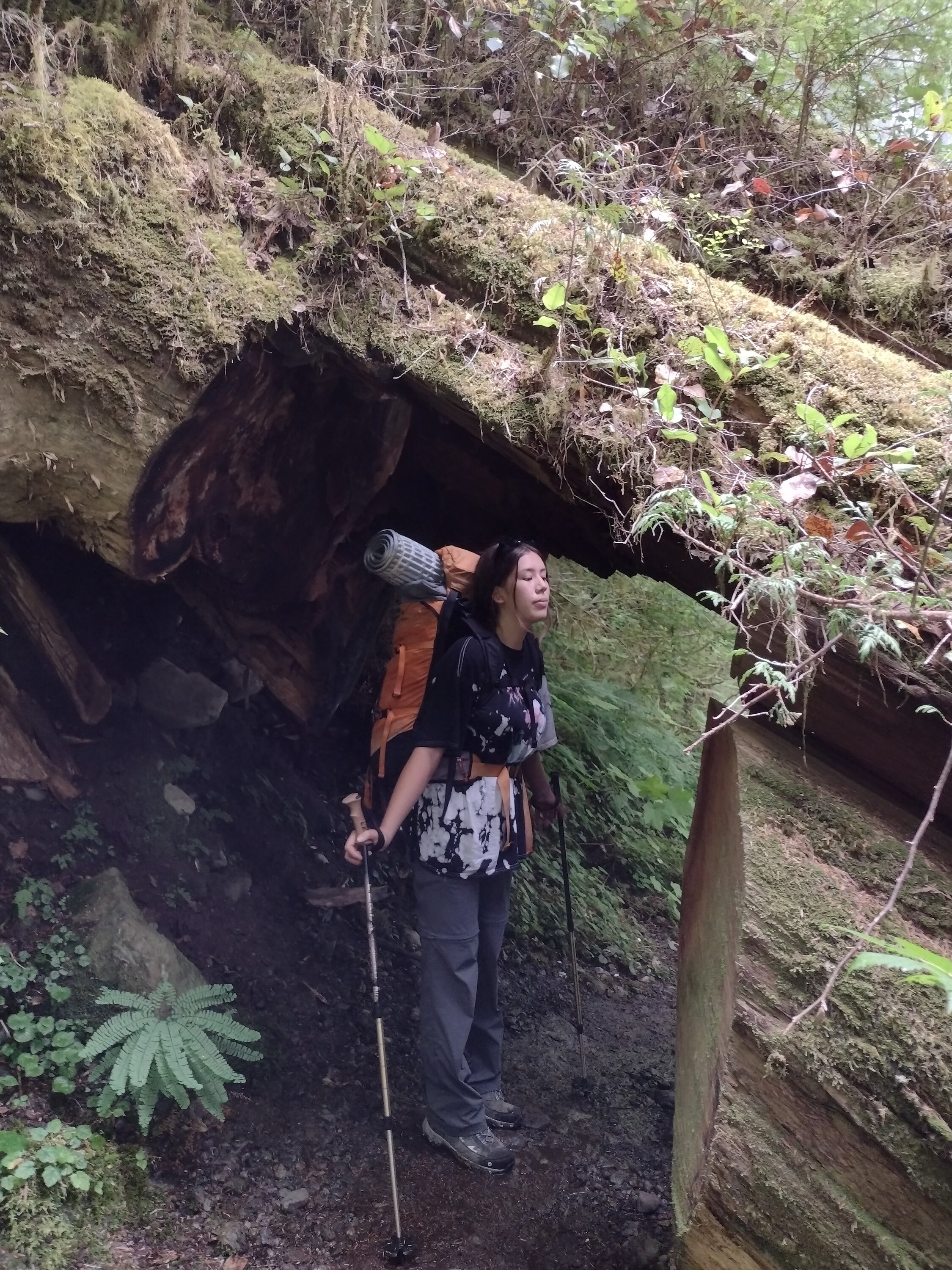 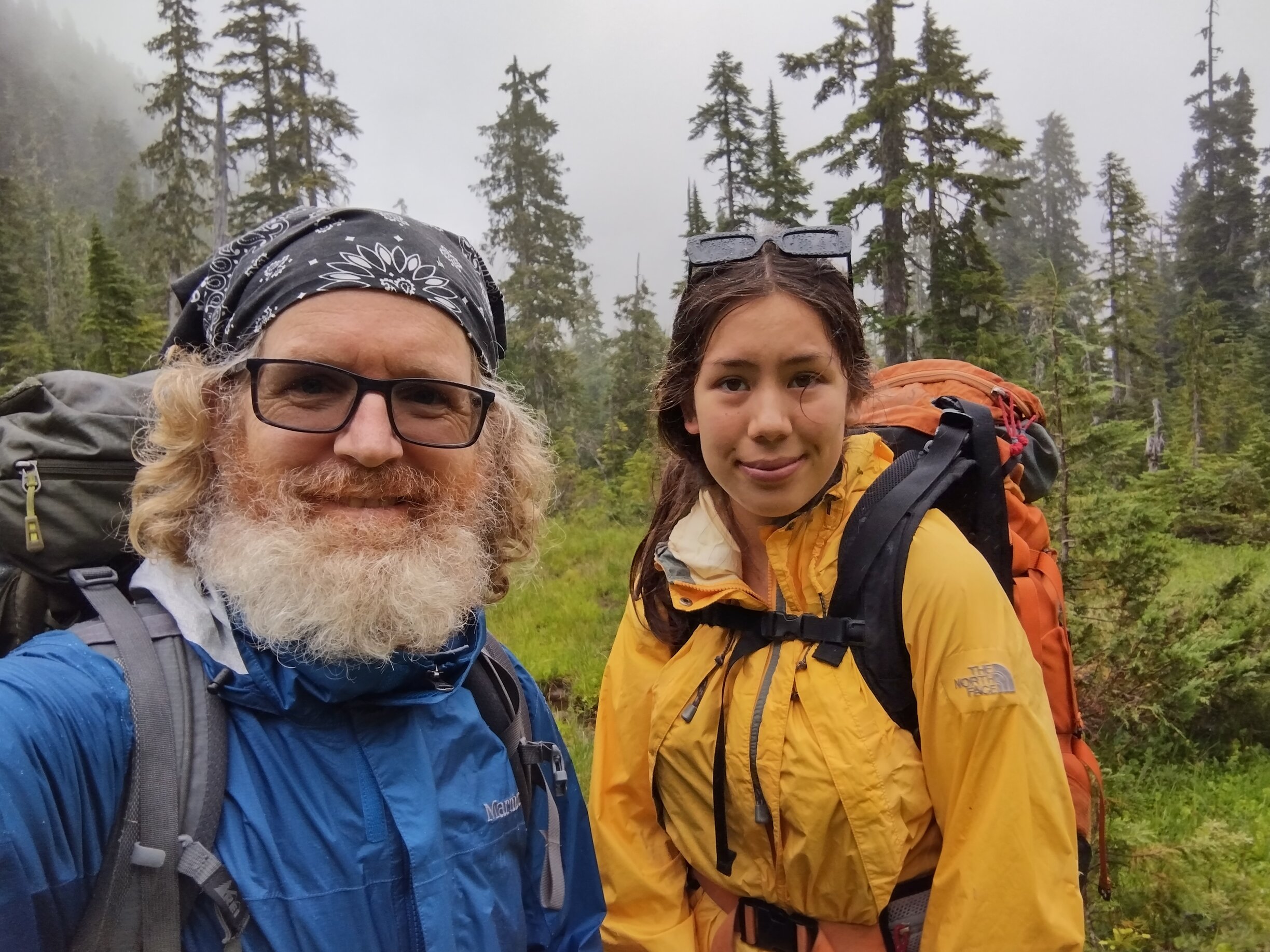 By afternoon, a steady drizzle had started and we reach Three Prune around 4pm, pitching our tent in the rain, cooking dinner, and retiring to the tent, wearing our wet clothes to sleep so that they would dry by morning. 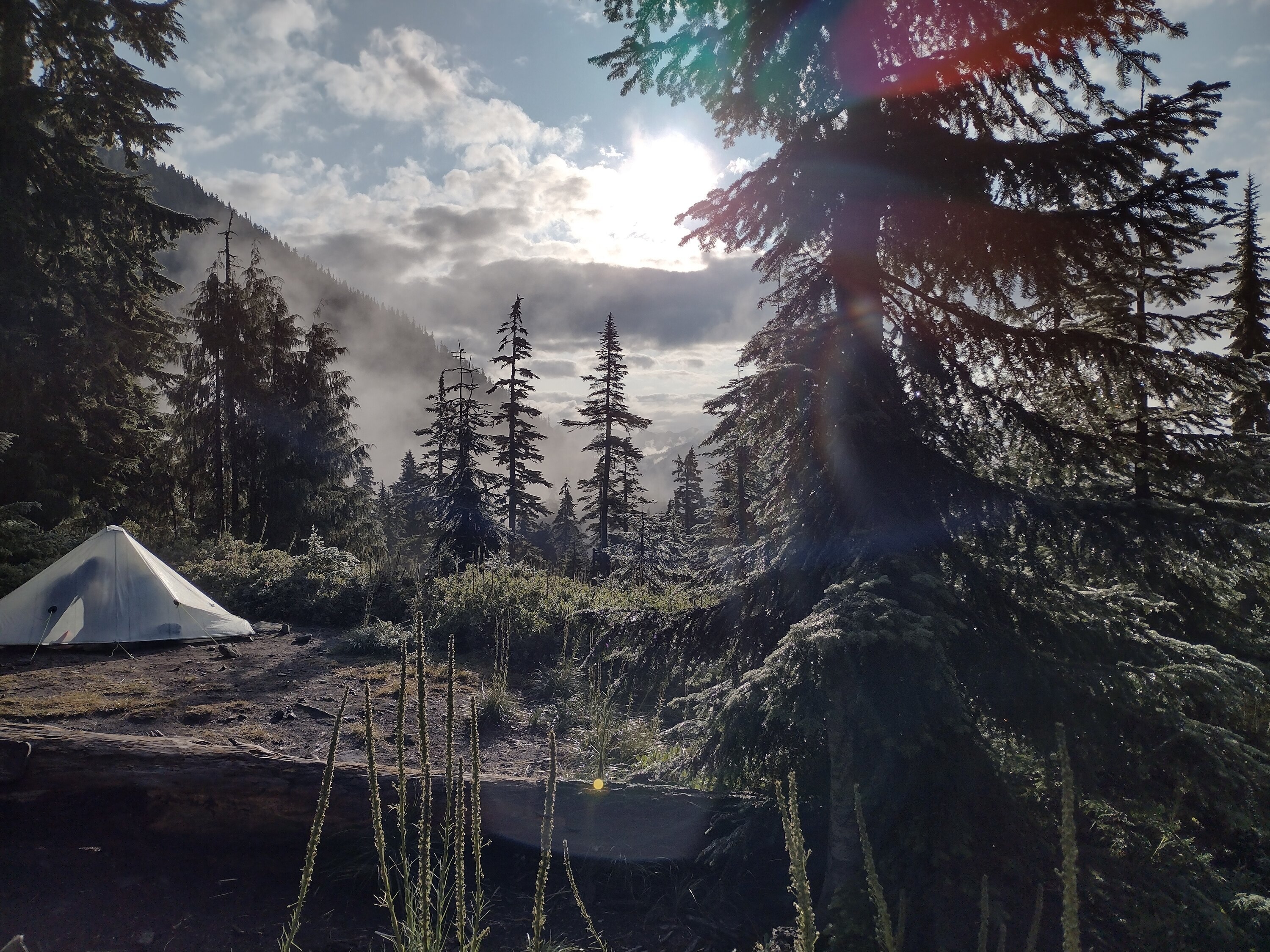 Dawn broke with the clouds drifting slowly out of the north, promising sunny weather ahead. After breakfast, we shook out our wet gear as best as possible and stuffed it into the bottom our packs, ready for the crux of the journey to Kimta Peak, across “the Burn”, through “the Moonscape”, to Lake Beauty. 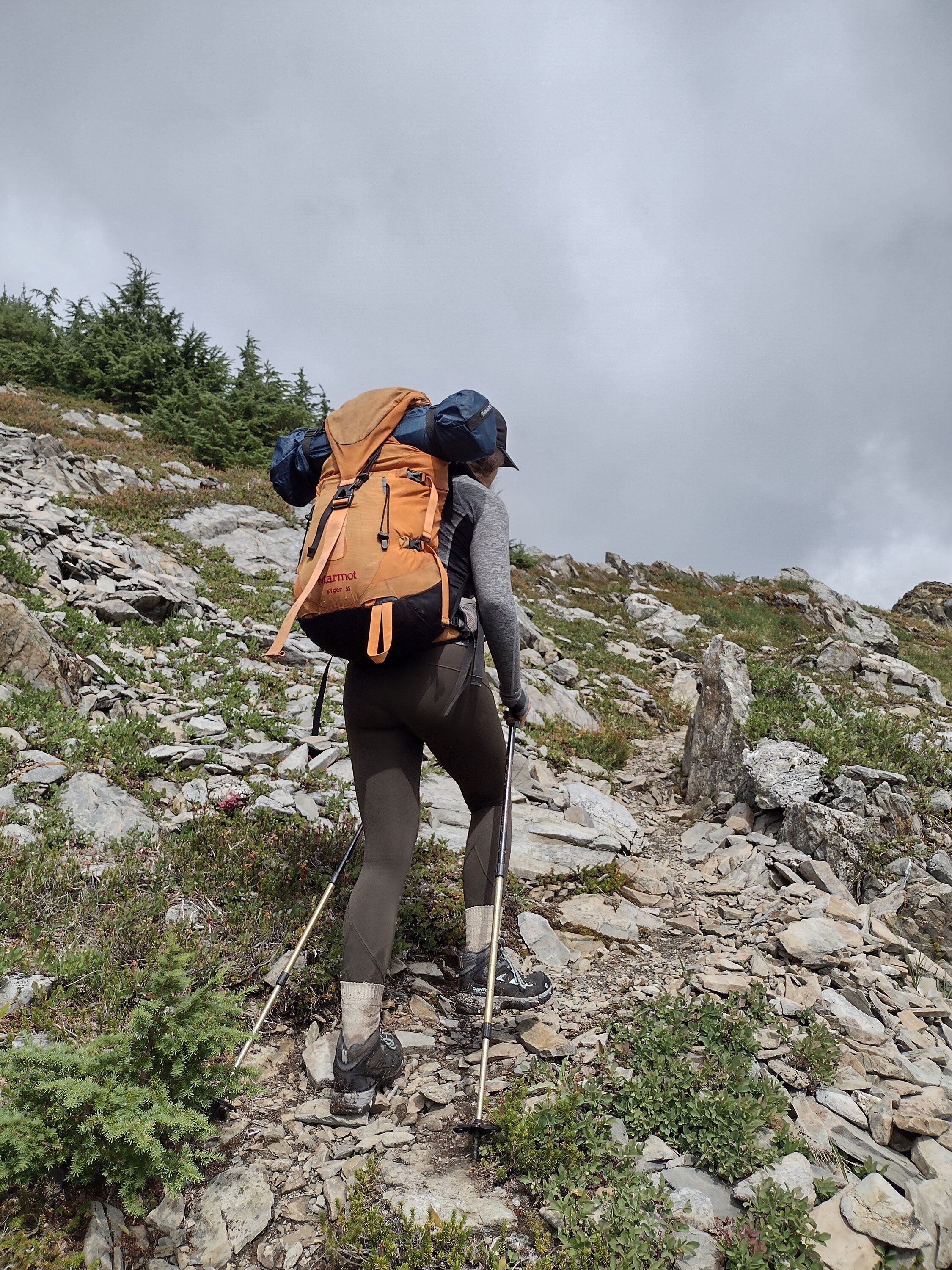 Up and down. At times on one side of a high ridge, then the other, and then perched on the ridge itself, with heavily forested slopes dropping steeply at a 35 degree angle on both sides, thousands of feet down into trackless valleys. Step by step, we entered more deeply into a walking meditation, breathing in the pine needles, newly watered flowers, grazing on more blueberries amidst a landscape straight out of Tolkien’s Middle Earth or a Miyazaki film. We call this spot Totoro’s forest (below). 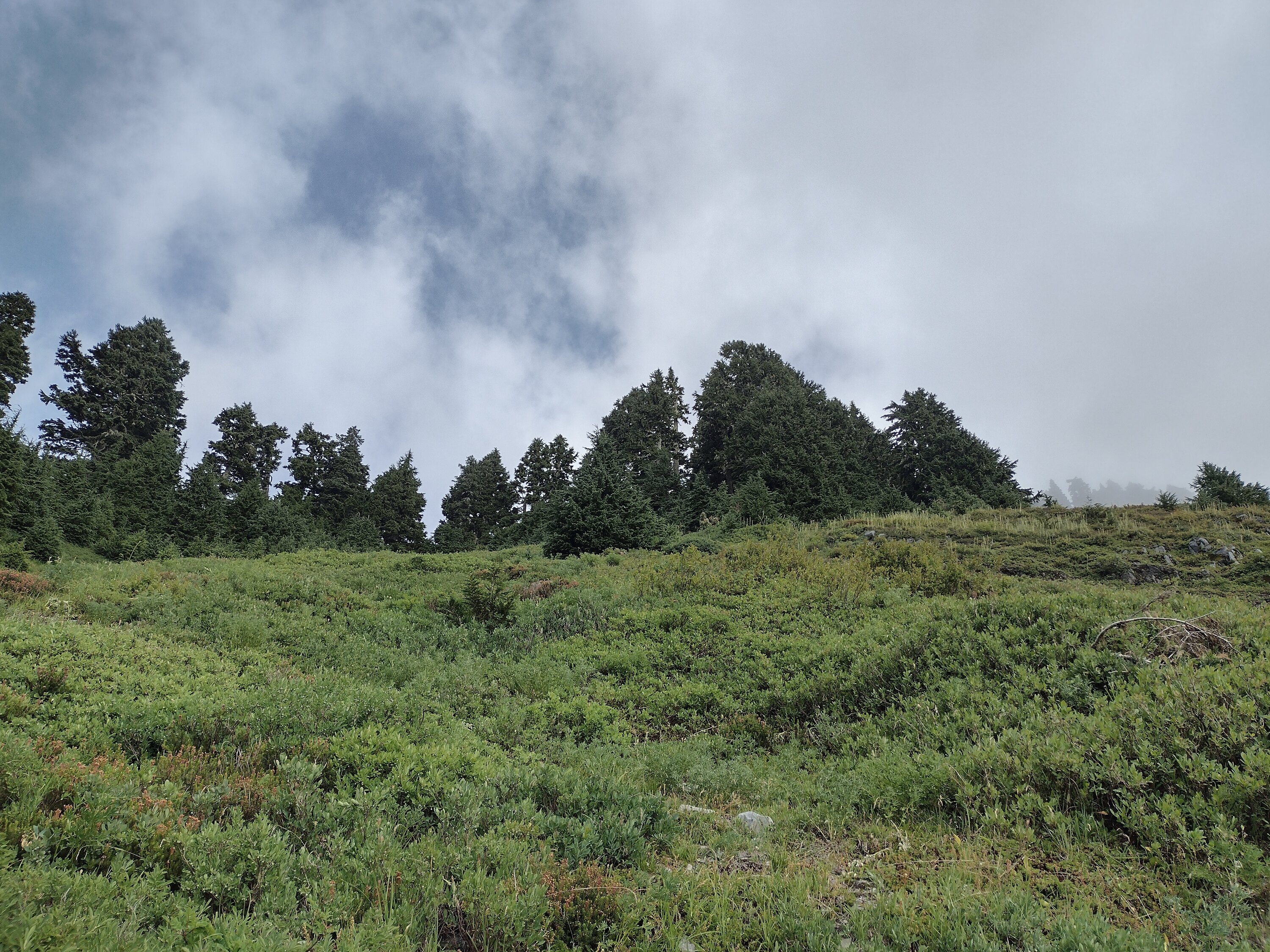 Nearing Kimta Peak, we encountered pockets of deep snow left over from a heavy snow year (below) 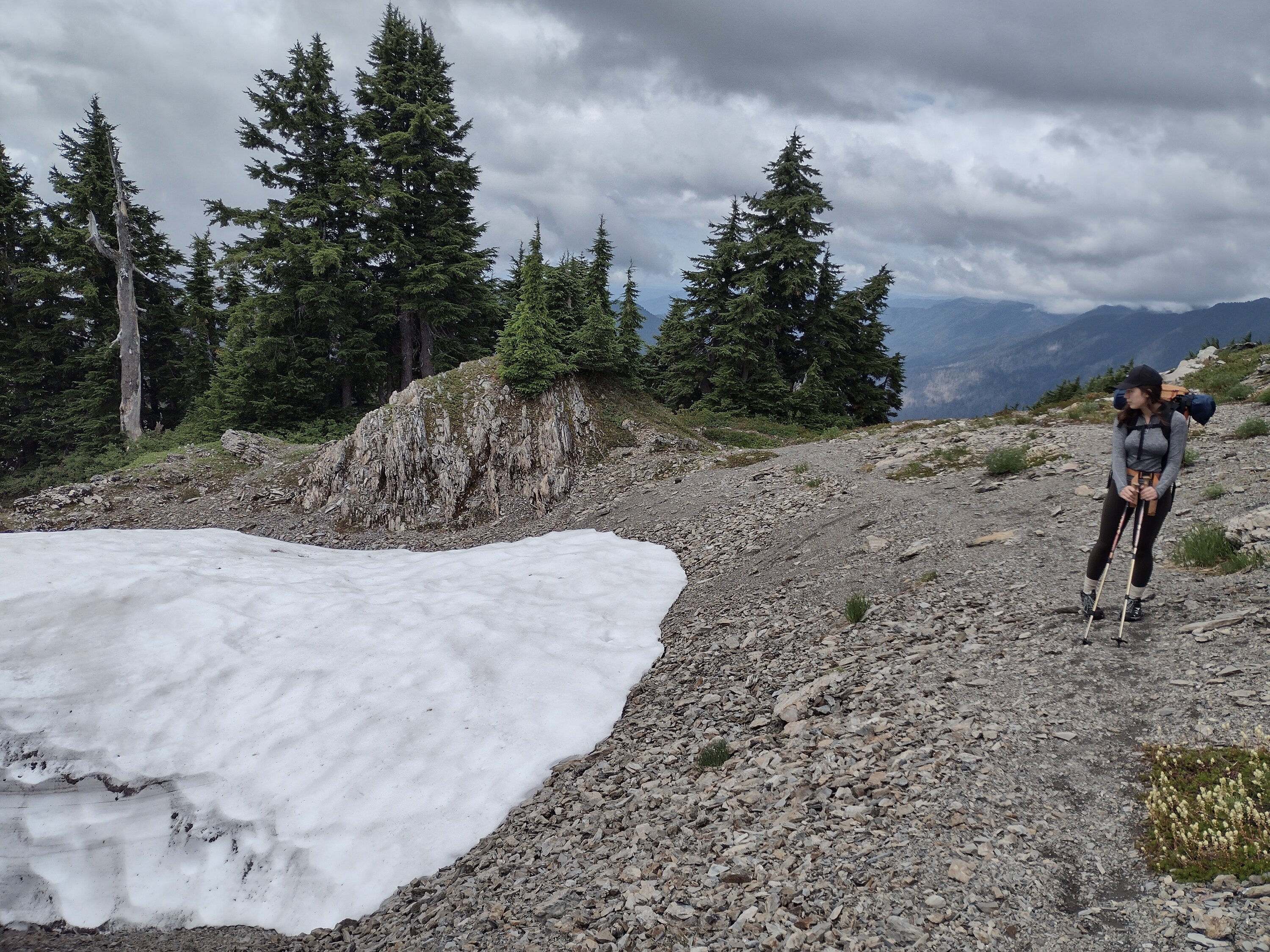 Making the turn at Kimta, we collected some water at the unnamed campsite and began a long steep descent towards The Burn. (below) 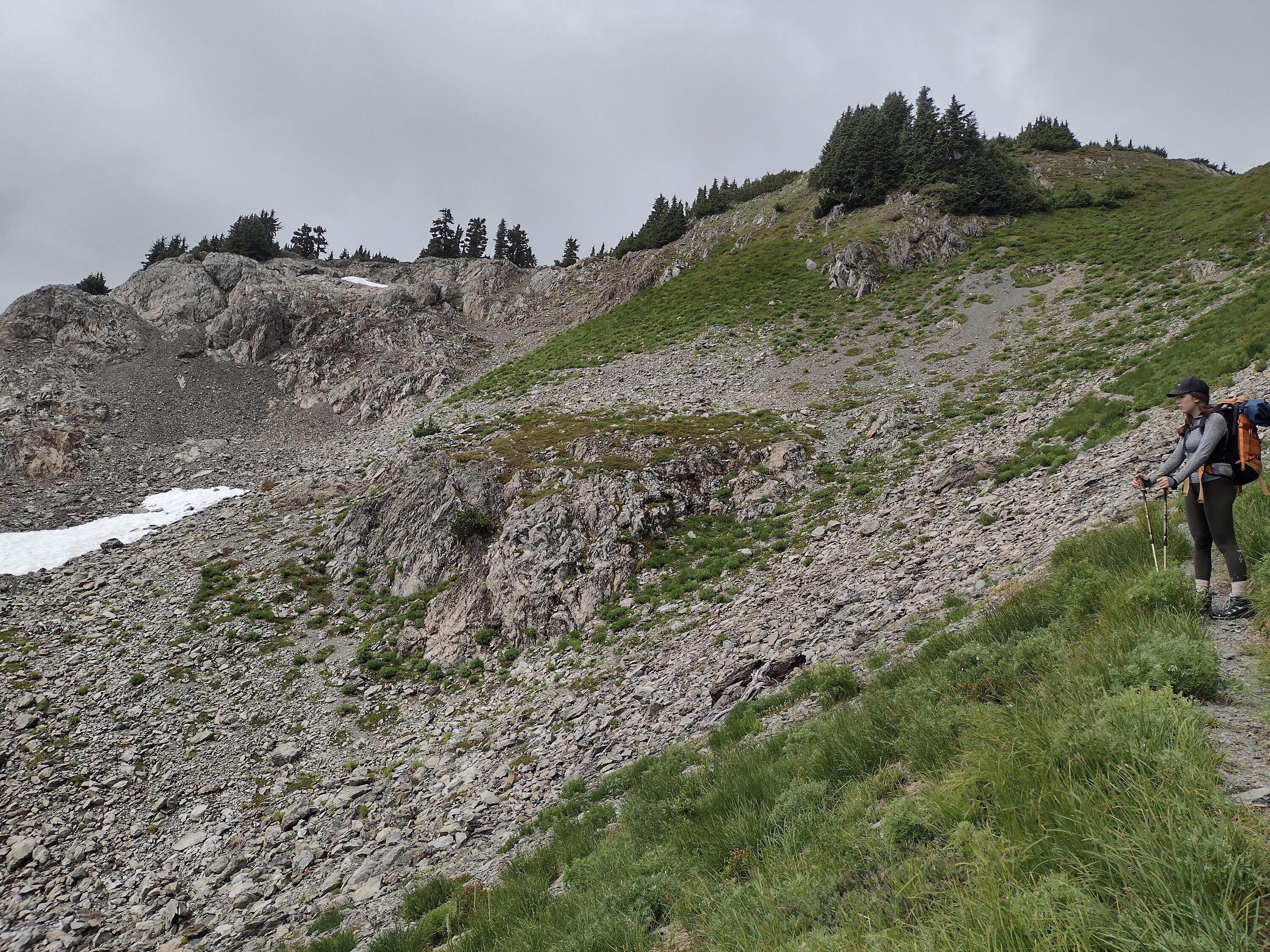 The Burn – site of a forest fire long ago, testament to Nature’s power of healing and regeneration. (below) 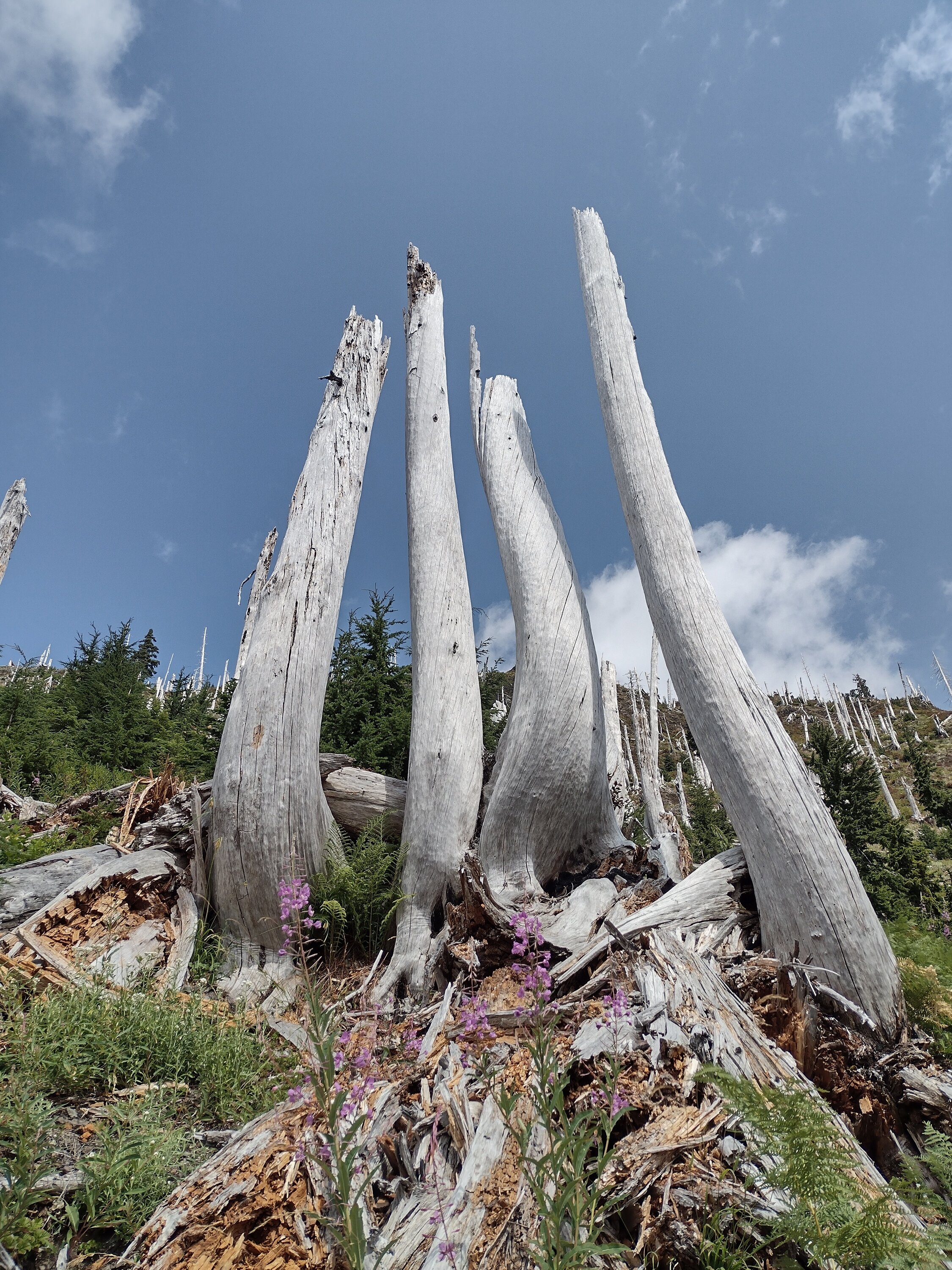 After climbing 800 feet out of the Burn, one enters the Moonscape, where route finding involves carefully scanning for the next rock cairn amidst a broken landscape of rock and very few trees. Amazing crystals to be found and left where they lie (“leave no trace, take only pictures and memories”).

Body conundrum. Arriving at Lake Beauty (below) after a grueling but exquisitely beautiful nine hour hike with 2-5 minute water breaks every 30 to 45 minutes, I suddenly have no appetite. My limbs are shaky. I have almost no energy and my stomach feels queasy. Possibly a case of heat exhaustion. I forgo dinner and get in my sleeping bag to escape the clouds of mosquitoes. At least I am warm and dry!

In the morning, I don’t feel much better, but force myself to eat some noodles. Danny, another hiker with his daughter kindly offers me some electrolyte tablets which immediately provide some energy, though the stomach discomfort remains. My daughter resolutely offers to shoulder more of the pack weight and we begin trudging up the hill just after 8am with our first goal being Low Divide Ranger Station  (about 7 miles). Danny had mentioned that the ranger was there when they passed there the day before.

After reaching the first pass, we began a long descent through mountain meadows, new panoramas, and more blueberries. As we slowly tick off the miles step by step, I enter into a familiar mind zone of working with physical difficulty by practicing being in the moment – no hopes or fears, just being present with the body, the breath, emotions, and feelings that arise and pass away, and reflecting on a formula that one of my Buddhist teachers once shared with me: Suffering = Pain (or discomfort) X Resistance. No matter how high the pain, if resistance is zero, then suffering is zero. Basically it’s a formula that leads to spiritual liberation and enlightenment. Even while enduring difficulty, there is much beauty to be seen and understood. My daughter remarked “everyone we meet on the trail is so friendly.”

I began to realize that even though my body is uncomfortable, it has stamina. My daughter had expressed some interest in shortening the hike to 3 days instead of 4. I initially told her this was unlikely, but as we approach the trail junction, I spot a large log across the river and realize that if shimmied across, we would save 2 miles and possibly make it out in a day.

Entering the home stretch after taking off our shoes and wading across 16 mile Camp – only 12 miles to go! We reach the car at 9pm as darkness descends.  With gratitude to the trail crews who keep these trails open, to Danny for the electrolyte tablets, to Upel, who cooked and looked after my father for 3 days, and to my amazing daughter for sharing time with an old man! 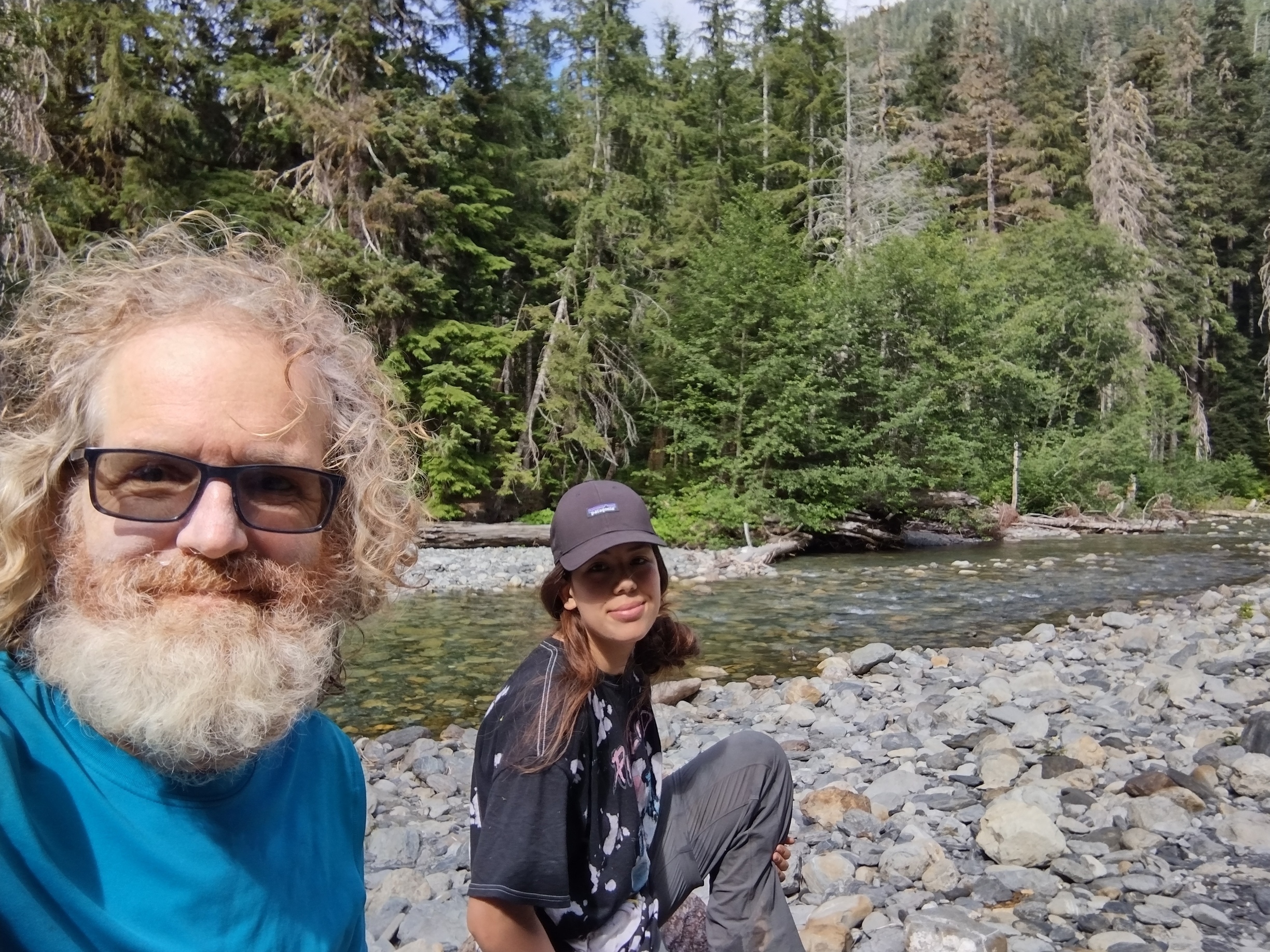