Today, following the Supreme Court ruling which upheld Trump’s Muslim ban, our country has sunk to a new low, or rather, simply reaffirmed it’s racist history. Let there be no mistake, SCOTUS has followed in the shameful history of Dred Scott, the Chinese Exclusion Ban, Plessy vs. Ferguson, and the Korematsu decision which upheld the legitimacy of the Japanese Internment Act.

Ironically, but cynically, Chief Justice Roberts today struck down the Korematsu decision, but by doing so, he gave political cover to today’s 5 to 4 ruling upholding Trump’s Muslim ban, pretending there is actually a difference between the two rulings. There is not. Both are predicated on the racist, xenophobic notion that certain groups of individuals defined by race and religion, cannot peacefully coexist as part of America. Trump promised to ban Muslims from entering the US as part of his campaign pledge. The initial lower court ruling in Hawaii overturned his executive order because it so obviously targeted a religious group. Today’s ruling pretends that race and religion has nothing to do with it. Chief Justice Roberts brushed aside concerns over Trump’s intent and his racist rhetoric casting the issue as one of Presidential authority to restrict immigration based on national security concerns.

As we stood in front of the William Kenzo Nakamura courthouse, one Japanese speaker pointed out that Mr. Nakamura fought for the U.S. Army against Axis forces in 1944, was killed in action, and ultimately received the Medal of Honor for his heroism. This, while his relatives were interned in a concentration camp in Idaho. Similarly, our Muslim brothers and sisters in America make innumerable contributions to peace and universal prosperity today, while continuing to face the hateful Islamophobic stereotyping and rhetoric, which has reached epic proportions under the Trump administration and his white supremacist band of rogue agents that have taken over American democracy. Make no mistake, the hatred and stereotyping will only grow worse, if you and I and the average citizen remain silent in the face of such injustice. 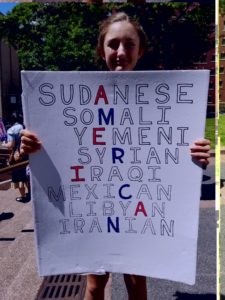 Yes, one can argue rightly that those elements of hate and racism have always been a part of the American story. I grew up in white America, with the privilege of feeling like I belonged here, of seeing my race universally represented in positions of power and influence.  I remember the fourth of July celebrations as a youth. There was a sense of greatness in our nation, in our economic and cultural successes, and the modest affluence of life in small town New England.  But it was a white town, with its unconscious assumptions of Manifest Destiny, America First, and certainly very little appreciation for Buddhist notions of Interdependence. Independence Day, after all, is still our national holiday. I was locked in a bubble and my world view was shaped by the conversations, the images, the world view, of the people with whom I shared that bubble.

I started poking at that bubble after graduating from college, growing increasingly disenchanted with the materialistic happiness that was offered to me as my white inheritance. Somewhere along the way, I popped that bubble, probably in large part to travels outside the  United States – in Peru, Haiti, India, Pakistan, Tibet, and Turtle Island, observing, as the Dalai Lama has often commented, how all humanity shares the same needs and feelings. Every human being, beginning as children, needs love, needs to feel safe with their mother, their parents, in their communities. We need healthy food, clean water and air, a sense of home without bombs or poisonous gases falling from the sky. The planet is really quite a small little rock floating in space, with a very thin atmosphere, all of which is under severe threat by climate change.

We share all these needs, and these immense environmental problems. Many places in the world are becoming uninhabitable due to climate change – Syria, parts of Central America, Africa – really everywhere is affected. And when conditions become unlivable, threatening huge populations with famine, drought, disease, people become desperate. Violence easily erupts. What if instead of spending so much time, money, and energy on building walls and borders, what if instead we invested in global solutions?

And here, I don’t mean solutions that impose new forms of capitalistic-colonial domination with privatization but solutions that genuinely come from love and an understanding that what happens to “the least of these” happens to us as well. There can be no peace until there is justice for all. And in my mind, that means dismantling agencies like ICE, and retooling our country from a war and greed machine into a garden of compassion. 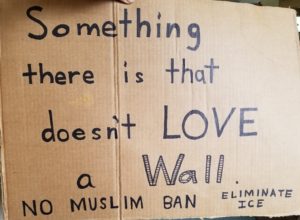 That will take work. It will take civic engagement beginning at the ballot box, and extending to meetings and rallies to fight back and organize against injustice and evil. When I say fight, of course, I mean non-violent resistance. Violence only creates more violence. Ultimately, it requires a transformation of the heart, a realignment of one’s moral purpose in life, of one’s priorities. For those who have some privilege, it might seem like the situation is not urgent. That turning away into one’s personal priorities are more important. Yes, we all have our personal dramas to contend with, including myself.  We allow ourselves to be distracted in our personal bubbles at our peril. Remember history and the good German citizen, as Hitler rose to power. That history is recreating itself now.

The people I admire most though, and the ones who seem most at peace, they have harnessed a power, a force of goodness that radiates from within. They speak effortless truth in front of hundreds, thousands, with no notes in front of them, guided only by the inner light of their hearts.  And they can transform the minds of others, even those under the sway of ignorance and evil, simply through the love and truth that they direct with precision and skill.  We all have that power of truth within us. It just needs cultivating before it can blossom forth. “Something there is that doesn’t love a wall, that wants it down.” Robert Frost