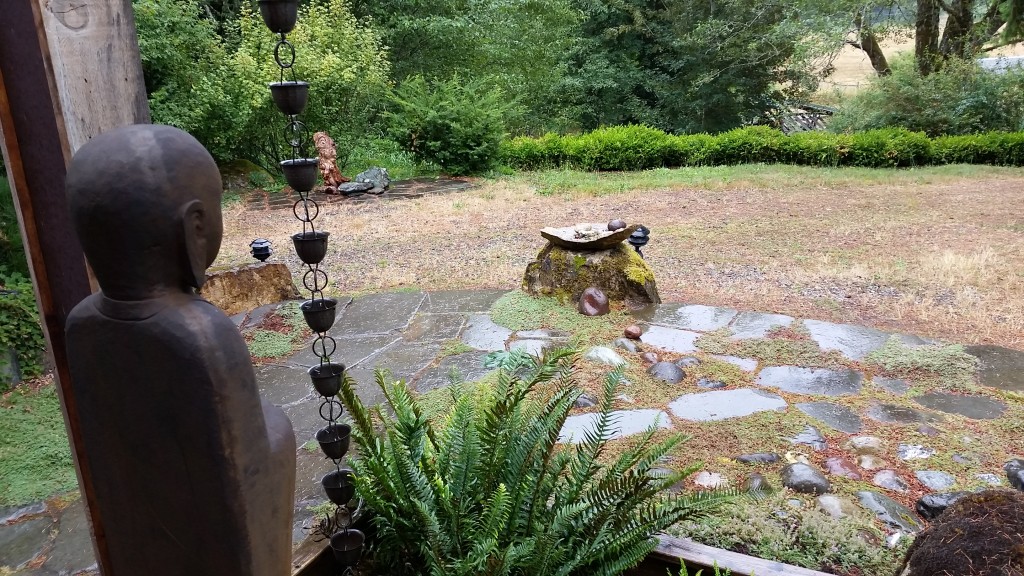 The most important thing I did in the past month was   n o t h i n g   at all!  Doing nothing is actually quite a task. My wife, daughter and I attended a 3 day family meditation camp at Mountain Lamp Community in the foothills of the Cascade Mountains. We spent a lot of time watching our breath and not much else. Our daughter had lots of kid activities with the occasional sprinkling of group mindfulness at the sounding of the bell. Reconnecting with my breath and intrinsic aliveness laid the spiritual foundation for other doings providing the bones of this month’s blog.

When I returned home, I realized that yet again, the disease of busyness was taking a toll on my peace of mind and I reaffirmed my commitment to a daily meditation practice which has been going strong for an entire week now. And what a week! On Tuesday, I said goodbye to my wife and daughter who departed for one month in Taiwan. I was left alone to take care of my parents and pay for their trip. Joking! My wife works hard at various jobs and she  earned the trip – both figuratively and financially. The little one works hard too. I’m so proud of her school work and her mastery of two languages and two cultures, and her patience with two sometimes grouchy parents. I will be different when you return!

Once, I had the good fortune to take a writing class (in person) with the Canadian author, Anne Cameron. She posed a question to the class – do you think people are really capable of change? It’s a good question to ask ourselves periodically.  I obviously believe that we can, and in fact, the only real constant in life is change. But it goes much deeper than that.

On Thursday, I drove my mother to her dental appointment. As I sat in the waiting room, I thumbed through the Facebook feed on my cell phone and was immediately captivated by the breaking news about the Greenpeace/Backbone blockade of a Shell Oil supply ship in Portland, Oregon which was trying to make its way back to the Arctic to initiate offshore drilling in a previously off-limits area.  A friend messaged me and said “Are you in PDX in your kayak?”. I immediately checked my Navigation app – 165 miles one way, 3 hours driving on the freeway. The blockade was unfolding rapidly – it could be over before I got there. 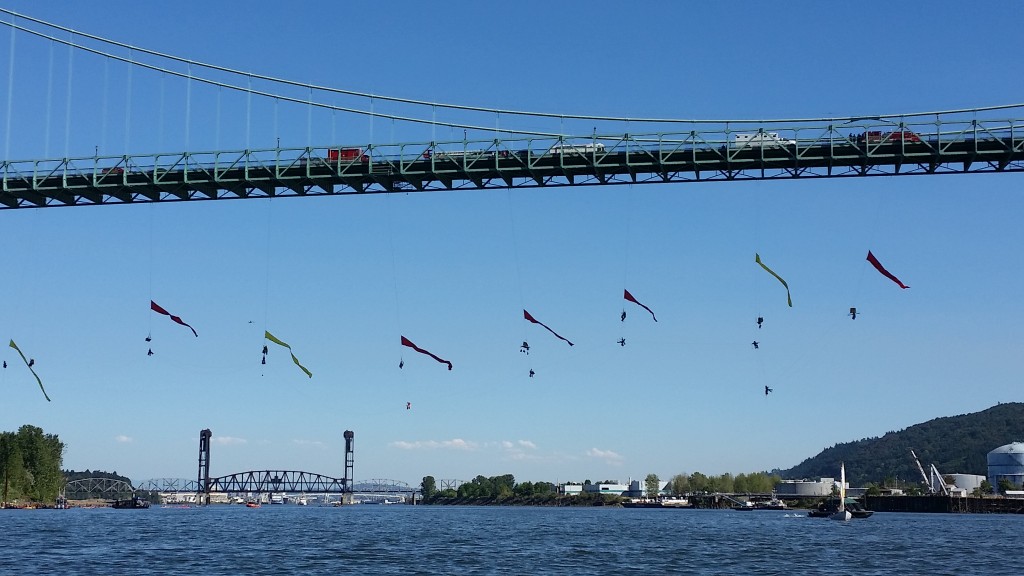 The planet is burning. Seattle just had the hottest July on record. The rainforest out on the coast is burning following the unprecedented drought and low snow pack year. Smell the toast Jordan! I drove my mom home, wolfed down some lunch, threw my paddling gear, some food, and a few gallons of water in the back seat of the car, and started rolling down the highway, intent on peacefully participating in defense of Mother Earth – without getting arrested.  Stepping out of my air conditioned car into the 100 degree afternoon heat, a surreal spectacle greeted me. About a dozen Greenpeace climbers were rappelled with sleeping platform and supplies from a bridge. They had already  been there for 36 hours. Beneath the bridge, a mass of kayakers were being corralled by a dozen or so law enforcement boats. Several hundred people were on the shoreline, cheering on the activists in the water and air. 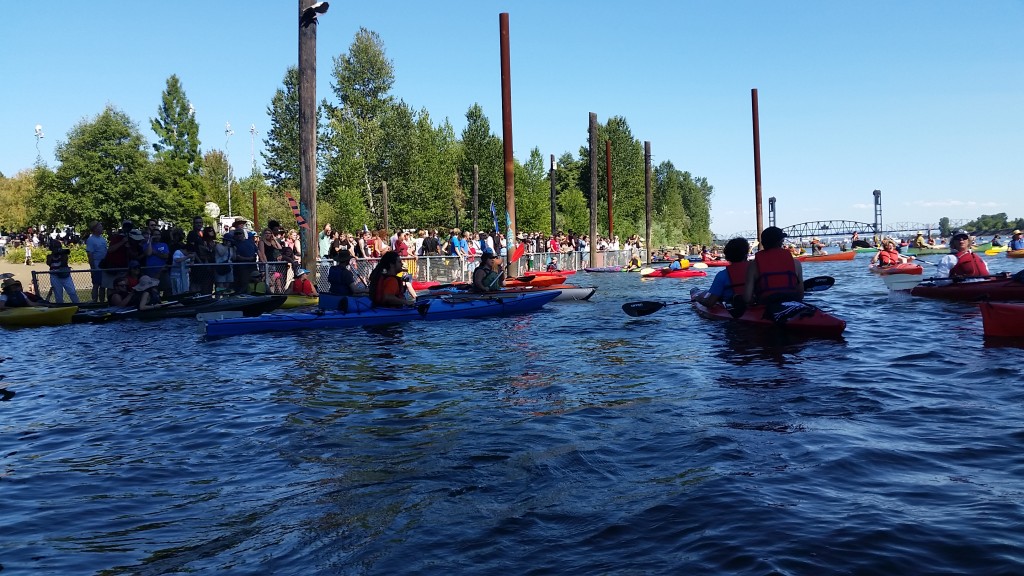 The scene was at times tense, with cops on jet skis charging at kayaks. A few of the Greenpeace rappellers hanging from the west side of the bridge were being removed and arrested overhead. It became clear that soon they would try to pilot the enormous ship through the opening created by the vacated rappellers. So far I had managed to avoid any confrontation with law enforcement and paddled upstream, wanting to get some distance from the crowd in order to see things from a new perspective. 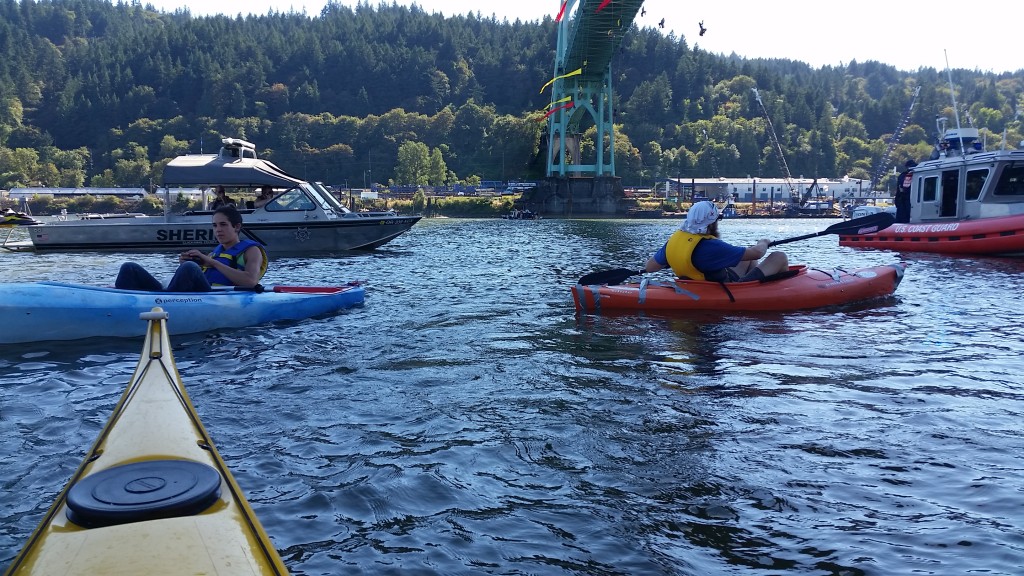 Someone told me that a protester had just locked his neck to the Steel Bridge upstream using a bicycle U-lock, preventing the bridge from being raised, thus preventing the Shell ice breaker from moving downstream. Apparently, the police were ready for such tactics and he was quickly cut free. The bridge started to go up and the industrial beast loomed into view. 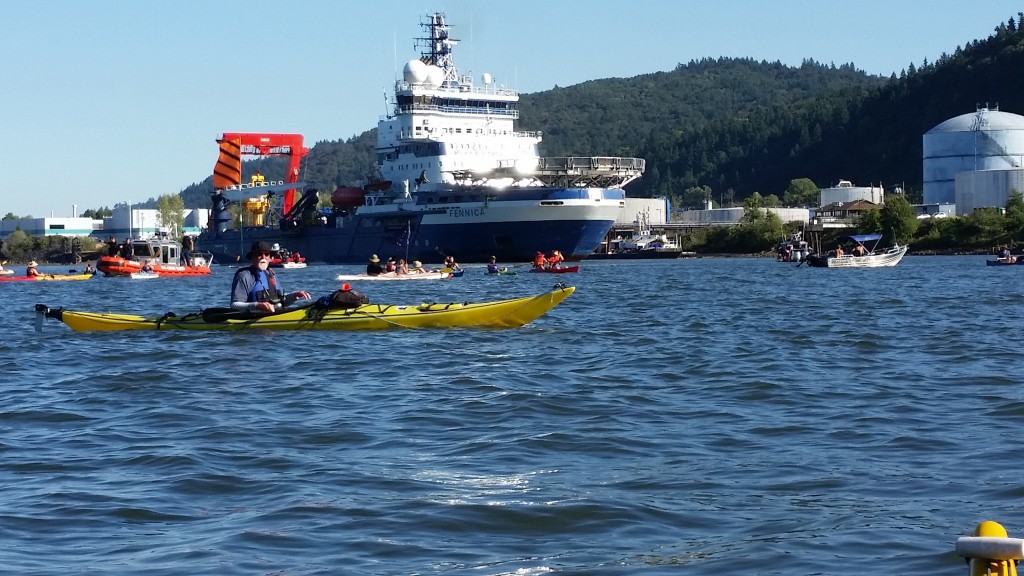 Suddenly, nearly all the kayaks and small craft (about fifty) sprinted for the mid channel – a last ditch effort of many Davids (and Davidas) trying to stop Goliath. If Shell starts drilling in the Arctic, it’s game over for the climate. Just in the past few weeks, James Hansen has said that a sea level rise of 10 feet by 2050 is a certainty if we can’t limit global warming to 2 degrees C. Wow.

The kayakers – outnumbering the police boats by 5 to 1, engaged them in a sometimes hilarious, sometimes scary game of catch-me-if-you-can, and for a moment, the planet-breaker was forced to reverse its engines and wait for an opening. But it was soon over. Portland’s mayor played his own game of political opportunism, spouting to the press that next week he would be in Washington D.C. to talk to President Obama about climate change. But it was clear who was floating his boat in the heavy handed enforcement tactics I witnessed on the water. I stayed well away from the fray, convinced that documenting this event and bearing witness in the battle to save the planet was an important role.

What happens next is up to each one us.  (One thing you could do right now is call the White House and ask them to cancel Shell’s Arctic drilling permit).  I was often distressed about the state of the world as a teen. It was during the tail end of the Cold War, with the doctrine of mutual assured destruction (MAD) hanging over all of our heads. On my first date with a girl, I talked about the arms race.  I no longer feel distressed about things I can’t change, or about things I can change – what good does that do? Get going on what you can change and let go of the rest. Put your body (and mind) to work, serving others, taking time out now and then to recharge your spiritual batteries. Tomorrow, I am going paddling. Wilderness is a good antidote to the stresses of modern life. Peace and happy trails.